“The will illustrate the principle in animation which we call the ‘plausible impossible.’ [It] means taking something that is against the laws of nature – something impossible – and making it appear rational, and acceptable.”

The episode begins with Walt showing some drawings that were made for a scene in Snow White and the Seven Dwarfs that was never used. He then introduces the term ‘plausible impossible’ from the Disney book The Art of Animation, and explains that this was not a term the animators invented, but an animation principle that goes back centuries. The history begins with the Egyptians, with the animations of the gods, and the Chinese animating dragons. The segment from Fantasia – “The Rite of Spring” – then is shown, along with the theory that the Chinese conception of dragons may go back to the stories of the dinosaurs. The explanation then moves on to Greek mythology, before applying plausible impossible techniques to the animated cartoon. Disney then relates how impossible cartoon scenarios have some sort of basis in fact. He also introduces the concept of “correctness in sensation,” using the feeling of riding an elevator to demonstrate the squash and stretch techniques. Each “plausible impossible” concept has its roots in the physical and psychological. This then moves into giving life to inanimate objects, and introduces the Mickey Mouse short film Thru the Mirror. 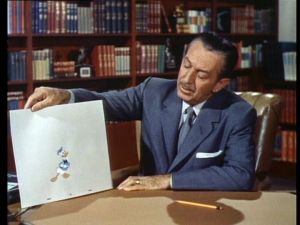 Walt introduces a recently drawn Donald, asking him to be his volunteer

After the short, Walt then shows how an animated character is created, with a magic pencil drawing Donald Duck. When Walt mentions the importance of sound, Donald starts to talk, and agrees to help Walt with a demonstration. As Walt explains different sound effects, poor Donald bears the brunt of the demonstration. Donald flees the demonstration and hides on Walt’s desk, with Walt continuing the demonstration without him, though Walt manages to tempt him back with food. This then leads to the Donald Duck short film Donald’s Cousin Gus. Walt then surprises the audience with the complete showing of the unseen test animated sequence drawn for Snow White and the Seven Dwarfs after some accompanying scenes from the finished film. The final segment of this episode is about program music, which is a story put to music. Using the classic piece “Night on Bald Mountain,” Walt places it in several animated features, including “The Sorcerer’s Apprentice” from Fantasia, and a scene from Bambi. The true scene from Fantasia with the music is shown, with the music driving the story.

On October 30, 2012, Disney agreed to acquire Lucasfilm Ltd. through a stock and cash transaction to owner George Lucas. The overall deal was worth $4.05 billion, with Disney acquiring all aspects of the company, including LucasArts, Industrial Light & Magic, and Skywalker Sound. Co-Chairman Kathleen Kennedy was named as the President of Lucasfilm within its new incorporated structure, and serves as the brand manager for the Star Wars franchise. George Lucas would remain as a creative consultant for the successful film franchise. The announcement also came with the promise that the first Star Wars continuation film would be released in 2015. CEO Bob Iger also went on record to say “As far as the legacy George [Lucas] has created, we don’t take that lightly. We definitely plan to expand the presence of Star Wars in our parks which could include new parks.”

October 29, 1966 – Walt Disney is Awarded by the American Forestry Association

“…for outstanding service in conservation of American resources.”

On October 29, 1966, Walt Disney was awarded the American Forestry Association award in Williamsburg, Virginia, for his service in American conservation. Throughout the years, Walt had done much to call attention to the conservation of nature, including allowing the use of Bambi to be used on posters warning the dangers of forest fires. At the awards banquet, Walt ignored his prepared speech and focused instead on an extemporaneous monologue about his love of nature.

“The actor’s considerable banjo-playing skills were in the spotlight, but his comedic talents pop in as well before a delighted near-capacity audience.”

On October 28, 2009, Disney Legend, songwriter, and comedian Steve Martin performed with the Steep Canyon Rangers at a sold-out show at the Walt Disney Concert Hall. Martin was promoting his new album The Crow: New Songs for the Five-String Banjo, which had reached the top of the Bluegrass Album charts. Martin, straddling the line between stand-up routine and banjo concert, entertained the crowd with his own compositions and a few bluegrass standards. Martin was also joined by fellow banjo player and songwriter Abigail Washburn for a 40-minute set.

October 27, 1982 – The Special Short Film Fun with Mr. Future is Released to Theaters 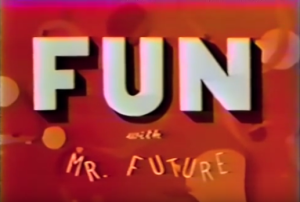 On October 27, 1982, the special short film Fun with Mr. Future was released to theaters for Academy Award consideration. The short was directed by Darrell Van Citters, with story by Citters, Michael Giamo, Ed Gombert, and Joe Ranft. Mr. Future was voiced by Philip Proctor.

The short begins with an audio-animatronic figure named Mr. Future, who announces his intention to show the future lifestyles after comparing them to the inefficient ways of the past. Looking back, we see a mad scientist plugging in a light, then overloading the socket with several electronics. The mad scientist goes overboard, sending the whole town into a blackout. Mr. Future then introduces the thoughts of the audience about the future, before treating the audience to a rare glimpse of the future: machines that make getting ready for work and school done in a snap, chores done by a small machine that accidentally “cleans” the dog, and teleworking. Mr. Future then explores personal computers and teleworking, as well as home entertainment systems by the use of a process called “holography.” The short ends with Mr. Future singing “There’s a Great Big Beautiful Tomorrow.”

On October 26, 2009, Tiana’s Showboat Jubilee premiered at Walt Disney World. The celebration was the first of its kind celebrating the 9th official Disney princess from The Princess and the Frog, and combined a parade in Liberty Square, followed by a showboat ride with a live jazz band. A similar celebration opened in Disneyland on November 6. The celebration lasted ten weeks, along with other surprises to celebrate the film, and the celebration ended on January 3, 2010.

“May Walt Disney World bring joy and inspiration and new knowledge to all who come to this happy place.”

On October 25, 1971, the official dedication ceremonies of Walt Disney World took place in the heart of Main Street in the Magic Kingdom. The special event was filmed for an NBC special that aired on October 29, and featured a dedication speech by Walt’s brother Roy O. Disney, a marching band led by Music Man creator Meredith Wilson, and special appearances by celebrities, such as Bob Hope. This day kicked off a three-day celebration for the park, which also included a performance by the World Symphony Orchestra in front of Cinderella Castle, conducted by Arthur Fiedler. 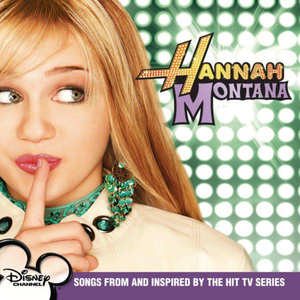 “Mix it all together and you know that it’s the best of both worlds.”

On October 24, 2006, the first soundtrack for the hit Disney Channel Original Series Hannah Montana was released through Walt Disney Records. The soundtrack began production after the show premiered with the highest ratings in the channel’s history. It featured songs from the show sung by titular character played by Miley Cyrus, as well as songs by performers The Click Five, Jesse McCartney, Everlife, and B5. The soundtrack debuted at number 1 on the Billboard 200, with a first week sales of 286,000 copies, beating out My Chemical Romance’s The Black Parade and John Legend’s Once Again; it was also the first television soundtrack to reach the top spot on the chart. To date, the album has sold more than 5 million copies.

October 23, 1942 – The Goofy Short Film How to Swim is Released to Theaters

“Everyone should learn how to swim.”

On October 23, 1942, the Goofy short film How to Swim was released to theaters. It was directed by Jack Kinney.

The short begins with Goofy modeling a simple bathing suit, before using a piano stool to simulate swimming across his living room. Unfortunately, Goofy doesn’t realize that he’s left his living room and is now “swimming” through traffic, though he manages to head back safely – until he crashes into his bathtub. The next step is to head to the beach, where he barely manages to fit in a beach locker. True to fashion, Goofy ends up with his locker in the bottom of the ocean. Another mishap occurs as Goofy eats his lunch underwater, and ends up with cramps all over. Afterwards, Goofy is taught how to dive, though he is not as elegant as the chart drawing, as he gets caught on the board and lands in an empty pool. His last session is using an inner tube to “surf,” but winds up being thrown onto a deserted island. All is not lost however, when he is surrounded by beautiful, adoring mermaids.

On October 22, 2010, the rolling stage show “Disney Channel Rocks!” premiered in Disney’s Hollywood Studios Park. The show traveled along Hollywood Boulevard before stopping for its main performance in front of the Sorcerer’s Hat. It was similar to its predecessor, “High School Musical 3: Senior Year – Right Here! Right Now!” in its format and showcasing song structure. The show itself featured music from several popular Disney Channel films, including Camp Rock and StarStruck. It closed on April 6, 2013.