“…Disney has sought to meet the constantly evolving viewing habits of our consumers, and today’s Hulu announcement is the next important step in that ongoing journey.” – Bob Iger, President and CEO of The Walt Disney Company

On April 30, 2009, a press release was presented by Hulu announcing the partnership between Disney through the subsidiary ABC Enterprises Inc. This partnership made popular ABC and Disney shows available to viewers, including Lost, The Wizards of Waverly Place, and The Secret Life of the American Teenager. This included full-length episodes from ABC, ABC Family, ABC Daytime, SOAPnet, Disney Channel, and from the Walt Disney Studios itself. Through this transaction, Disney also became an equity partner with Hulu, gaining three seats on the board: one for Iger; once for Anne Sweeney, co-chair of Disney Media Networks and president of the Disney/ABC Television Group; and Kevin Mayer, executive vice president of Corporate Strategy, Business Development & Technology.

“You can go outdoors now, and your sweater will keep you so warm and comfy!”

On April 29, 1949, the Pluto short film Pluto’s Sweater was released to theaters. This is one of the few shorts that features both Figaro and Butch with Pluto. It was directed by Charles Nichols, with story by Eric Gurney and Milt Schaffer.

Pluto and Figaro are quizzically studying Minnie’s new knitting project, which Pluto thinks is a long john for Minnie. However, Figaro corrects him: the sweater is for him. Minnie forces Pluto to wear the sweater, which he finds incredibly itchy. Although Pluto doesn’t want to be seen in the pink monstrosity, Minnie insists that he go outside, and throws him out the doggie door. As he stands outside, Butch and his gang come across him, and laugh hysterically. Pluto tries to hide, but the pink makes him stand out. The sleeves on the sweater are also too big, and Pluto finds himself completely tied up at one point. Pluto tries to free himself and ends up in a pond; when he gets out, the sweater shrinks at an alarming rate, and Pluto heads home with the sweater around his head. When he arrives, Minnie is distraught and begins to cry, and Pluto feels guilty about upsetting her – until he realizes that the sweater is the perfect size for Figaro, who puts up a fight when Minnie places it on him.

April 28, 1939 – The Donald Duck Short Film The Hockey Champ is Released to Theaters

“I see that a demonstration is in order…so I’ll beat the three of you all by myself.”

On April 28, 1939, the Donald Duck short film The Hockey Champ was released to theaters. It was directed by Jack King.

It’s a cold winter’s day, and Donald is skating gracefully on a nearby pond. He imitates figure skater Sonja Henie, when he sees his nephews playing a fast and furious game of hockey. As Donald shows his nephews his hockey trophy, the boys are unimpressed. Donald decides to play the three boys by himself, and immediately begins to show off. The boys watch as Donald continuously scores, but are less than impressed when he berates them. Donald decides to try and beat them again, this time blindfolded, but the boys get the best of him, leaving an angry Donald to chase them across the frozen pond until he crashes into a bank of ice. The boys continue to mess with their uncle as they continue the game in the snow. Donald falls into a well and manages to get stuck in a block of ice, but frees himself quickly to chase his nephews. Unfortunately, Donald accidentally swallows the puck, and the boys chase him, hitting him with his hockey sticks to get the puck in the goal. The game ends with Donald and the puck getting caught in the net, with Donald squawking angrily.

“The evening will feature an insightful analysis of Kahl’s animation drawings, rare film interviews with Kahl himself, and clips of his work…”

On April 27, 2009, the Academy of Motion Picture Arts and Sciences hosted a special event titled “Milt Kahl: The Animation Michelangeo, a Centennial Celebration” at the Samuel Goldwyn Theater. Celebrating the life and works of Disney Legend and Nine Old Men member Milt Kahl, the event was hosted by animator Andreas Deja, and featured a panel of those that worked with or knew the man, including Kathryn Beaumont, Brad Bird, Ron Clements, John Musker, and Floyd Norman. The event featured clips of Kahl’s animation, interviews, and an in-depth analysis of Kahl’s work. 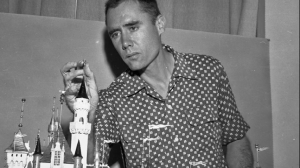 “Eyvind had done something that Walt loved on Lady and the Tramp: Walt wanted Eyvind to paint one background where when you saw that small American town, you wanted to live there forever. But if you looked up to the horizon, you saw adventure, and you wanted to get out of town.” – Animation historian John Culhane

On April 26, 1916, artist and illustrator Eyvind Earle was born in New York. As a child, his family moved to California, and at one point, his parents divorced. As a child, Earle suffered from polio, which killed his brother and paralyzed part of his face. At one point, Earle’s father gave him a command: every day, paint a picture and read fifty pages of a book. His father took him on a tour of Europe for three years, though the experience was less than ideal, as his father was a difficult man who beat his son. After three years, he headed back to his mother back in California. Although he didn’t want to paint anymore, he discovered he actually had a talent for it, and continued to do so during the Great Depression. In 1951, Earle was hired as an assistant background painter at the Disney Studios, with his first assignment being The Little House. He continued to work on animated features and short films, notably Melody and Toot, Whistle, Plunk, and Boom with Ward Kimball. When working on Sleeping Beauty, he worked on all the key backgrounds for the film, with many of the animators praising his work and sneaking up to see his paint in his office. To this day, Earle’s backgrounds have been praised for providing an unforgettable look to the film. In 1966, Earle left Disney and returned to painting full time. He was honored with a Winsor McCay Award in 1998 for a lifetime of achievement in the art of animation. He passed away in 2001.

“So many people know their songs, but not many people really know the boys.” – Julie Andrews

On April 25, 2009, the documentary The Boys: The Sherman Brothers’ Story premiered at the 52nd San Francisco International Film Festival. The film was then given a limited release in Los Angeles, San Francisco, New York, and Palm Springs, with a release on DVD in 2010. It has received positive reviews from critics, who were surprised at the backstory behind the high-achieving duo. The film was directed by Jeffrey C. Sherman and Gregory V. Sherman.

The documentary chronicles the often tumultuous relationship between the famous songwriting siblings, and begins in present day, where Richard is at the piano, while Robert is painting. Several people are interviewed about the impact the Sherman Brothers had on the films they worked on, with some acknowledging that people don’t know about the men behind the songs. Unfortunately, the two grew apart, and their sons Gregg (Richard’s son) and Jeff (Robert’s son) never saw each other until 2002 at the premiere of Chitty Chitty Bang Bang in the West End, where they reconnected after forty years. There was a lot of animosity between Richard and Robert, with Gregg and Jeff trying to understand why. They head back to the past, starting with their relationship as kids, creating a group called Alley Productions, where they put on performances for the local kids. The two were very close to their father, who was a Tin Pan Alley songwriter. Robert wanted to be a novelist, while Richard was a bit of a troublemaker who ended up in military school. When WWII broke out, Robert enlisted in the Army and went to Europe. When they both went to college, Richard finally decided that his calling was to be a composer. The relationship between the two was more distant while in college, as their life experiences were vastly different.

After college, the two lived together and worked on their respective talents: Richard writing a grand symphony, and Robert working on the great American novel. Their father challenged them to work together to write a song, and they wrote “Gold Can Buy Anything (But Love),” which was later recorded by Gene Autry. Although it wasn’t a smash hit, it gave them a taste of writing. The story then touches on the boys’ respective marriages: Robert to Joyce Ruth Sasner, and Richard to Elizabeth Gluck. The two continued to write music, separately, but they finally got together to write the song “Tall Paul,” which would be recorded by Annette Funicello and become a great hit for the star. The song became a huge hit, and the two started working together from then on. After writing several songs for Annette, Disney asked them to write a song for a film, and had to play it for Walt. The two were soon hired to write the song “Let’s Get Together” for The Parent Trap, and then were asked to work on Mary Poppins, giving them a full-time position at the Disney Studios. The documentary explores the work they did with the studio and for Walt, and how their relationship was splintering. After Walt passed away, the two continued working on special projects in and out of the studio, including Chitty Chitty Bang Bang, The Aristocats, and for Peanuts animated specials. They didn’t stay at the studio for very long after completing work on The Aristocats and Bedknobs and Broomsticks, as the studio never felt the same after Walt’s passing. The two grew further and further apart, with their families not interacting. After a while, the partnership just grew apart, but would continue to write for special projects, including for The Tigger Movie. After his wife passed, Robert decided to move to London, which Richard remained in California. The two finally reunite at the premiere of Mary Poppins on Broadway, with Gregg and Jeff hoping the documentary will also help reconcile the two.

On April 24, 2013, as part of the promotions for the Disney-Pixar film Monsters University, a Monsters University themed monorail launched in Walt Disney World. The monorail was covered in images of the characters from the film, with each car featuring a different fraternity or sorority. This monorail was the second in the line of advertising monorails for the year, with the first being one advertising Marvel’s Iron Man 3. The monorail was around long enough to be present at the “Monstrous All-Nighter” 24-hour event at the park.