May 31, 2013 – The Interactive Game A Pirate’s Adventure: Treasures of the Seven Seas Begins in Walt Disney World

“Discover hidden treasures, fend off enemies, and join Captain Jack on an interactive adventure of a lifetime.”

On May 31, the interactive park game A Pirate’s Adventure: Treasures of the Seven Seas began in Walt Disney World. Similar to Sorcerers of the Magic Kingdom, guests first go to an area called The Crow’s Nest and are given a map to find spots hidden in Adventureland of the Magic Kingdom on one of five searches for treasure: Heads You Lose, Guardian’s Curse, Haven Defense, A King’s Ransom, and Blackbeard. The adventures are based on the Pirates of the Caribbean series of films, including the characters of Jack Sparrow and Captain Barbossa. Any guest is able to play the game, and each mission takes about twenty minutes, although guests can stop and resume at any time.

May 30, 1953 – The Donald Duck Short Film Don’s Fountain of Youth is Released to Theaters

On May 30, 1953, the Donald Duck short film Don’s Fountain of Youth was released to theaters. It was directed by Jack Hannah, with story by Ralph Wright.

Donald is taking the nephews through a tour of the Florida everglades. He is angered that all the boys want to do is read comics, ignoring the scenery around them, but they throw a tantrum when Donald takes their comic book away. Donald then notices that the car is overheating, and rushes to get some water from a nearby spring. As he grabs the water, he notices a nearby sign stating: “This spring was mistaken for the Fountain of Youth by Ponce de Leon 1512.” He gets an idea to play a prank on the boys, and rips off half of the sign, leaving it marking the spring as the Fountain of Youth. Donald then sits in the spring, and pretends to have regressed back to a baby. The boys are dismayed at this, and start calling their uncle a spoiled brat. Upping the ante, Donald grabs an egg from a nearby alligator, and hides in the woods, watching the boys think he’s returned to an egg. The boys cry over their “misfortune.” The alligator wakes up and, spying its missing egg, starts chasing the boys, who frantically try to save their “Uncle Donald.”

The alligator hatchlings mistakenly think that Donald is their mother, much to Donald’s dismay

Donald has been knocked out by the alligator’s tail, and lands on her nest, warming her remaining egg. The egg the boys were protecting is knocked from their hands and lands in front of Donald, and both eggs hatch simultaneously. Thinking Donald is their mother, the hatchlings cling to him, although he tries to get away from them. The alligator hears her babies’ cries and starts chasing Donald instead. He manages to escape her by climbing up a tree, which she soon chops down with her teeth. Donald lands on the ground and collapses, and the boys, mourning their uncle, are relieved to find him alive and back to his old self. Donald quickly gathers his nephews and makes a break for it, leaving behind two very heartbroken hatchlings. Fortunately, they find their mother, who calls them close by imitating Donald’s voice.

May 29, 2009 – The Pixar Short Film Partly Cloudy is Released to Theaters

On May 29, 2009, the Pixar short film Partly Cloudy was released to theaters in front of the feature film Up. It was written and directed by Peter Sohn, with music by Michael Giacchino, and featuring the voices of Tony Fucile and Lori Richardson.

The storks are flying across the sky, delivering babies to expectant mothers everywhere before returning to the clouds. It is revealed that babies are made by clouds, then are given to the storks to deliver. While all the other clouds make puppies and human babies, one little black cloud named Gus is given the task of making somewhat dangerous babies, including a baby alligator, much to the chagrin of Gus’ loyal stork, Peck. Peck puts up with the dangerous creatures, ranging from headbutting rams, to porcupines, to sharks. Gus is concerned with Peck’s appearance, as the stork keeps losing feathers from the stress of his job, and is worried that Peck will leave him for a nicer cloud. As Peck sees Gus hold out the baby shark, Peck flies away, leaving Gus alone and throwing a tantrum. Dismayed, the little black cloud begins to cry, but stops when he sees Peck arrive with a package: the cloud Peck went to provided the stork with protective gear to keep him safe during deliveries. Unfortunately, Gus’ next creation is an electric eel, but Peck keeps up a positive attitude, once again loyal to Gus.

May 28, 1953 – The Special Short Film Adventures in Music: Melody is Released to Theaters

“Today’s lesson will be about something we really can’t do without.”

On May 28, 1953, the special short film Adventures in Music: Melody was released to theaters. This was to be the first in a series featuring the character Professor Owl teaching his students about principles of music, but only one other short was made (Toot, Whistle, Plunk, and Boom); the character would become best known for beginning the Disney Sing-A-Long videos. Melody was also the first cartoon filmed in 3D, and was shown in Disneyland’s Fantasyland Theater as a part of the 3D Jamboree, an attraction that remained fairly popular at the park, although 3D films didn’t really catch on in regular theaters. The short was directed by C. August Nichols and Ward Kimball, with story by Dick Huemer.

All the young birds gather at the school birdhouse, where Professor Owl is waiting to take attendance. He then declares that the lesson for the day will be “melody,” much to the enjoyment of the students. He directs them to the melody of nature, including the bird, the cricket, and the willow tree. He also says that there are only two creatures on earth that can sing: birds, and humans. Using a chart, Professor Owl points out the melodies in each stage of a person’s life. He changes the topic soon after to inspiration, with Suzy Sparrow drawing inspiration from love. Penelope Pinfeather sings her song, inspired by the ocean. Another student sings about trains, while another one sings about cowboys. The Canary Sisters sing a song about motherhood, before the class sings a song all about their inspirations. In conclusion, Professor Owl points out that “beautiful symphonies are often created from simple melodies,” and the short ends with an experimental look at music, featuring the beginning piece, “The Bird and the Cricket and the Willow Tree.”

May 27, 1938 – The Silly Symphony Wynken, Blynken and Nod is Released to Theaters

“Wynken, and Blynken, and Nod one night sailed off in a wooden shoe.”

On May 27, 1938, the Silly Symphony Wynken, Blyken and Nod was released to theaters. It was based on the poem by American poet Eugene Field, originally titled Dutch Lullaby. The short was directed by Graham Heid.

One starry night, Wynken, Blynken, and Nod sail across the sky in a ship made out of a wooden clog, setting out their fishing lines over the side. The ship lands in a cloud, and the three tots step out to push the ship back into the sky. They spot an area filled with star fish, and set about to catch a few, although it is much more trouble than they expected. The fish manage to outsmart the boys, and poor Nod is thrown over the side of the ship. A shooting star heads their way, scattering the fish and scaring the boys. They manage to hook their net over the shooting star, which carries them quickly across the sky. A group of black clouds send the ship flying across the storm, with the ship’s sail tearing in two before the mast breaks off. The boys tumble from the sky and back into a bedroom on Earth, revealing that the three are all aspects of a sleeping toddler.

May 26, 1991 – The Soundtrack to The Rocketeer is Released Through Hollywood Records

“I’m with you once more under the stars…”

On May 26, 1991, the soundtrack to the live-action film The Rocketeer was released through Hollywood Records. The soundtrack was composed by James Horner, and features vocals from actress Melora Hardin. Although the movie did not do well at the box office, the score was received well, with many critics noting that the soundtrack was one of the strong elements. The album features two covers of popular songs from the era: E.A. Swan’s “When Your Lover Has Gone” and Cole Porter’s “Begin the Beguine.”

May 25, 1983 – The Pinocchio’s Daring Journey Attraction Opens in Disneyland

“Board a woodcarver’s cart and take off on a fantastic journey that revisits the beloved tale of Pinocchio and his conscience, Jiminy Cricket.”

May 24, 2013 – The Monstrous Summer 24 Hour Event Starts at Disneyland and Walt Disney World 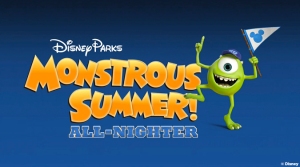 On May 24, 2013, to celebrate the release of the Pixar film Monsters University, the three American Disney Parks held an event called “Monstrous Summer,” where the parks were open for a full 24-hours of fun and exciting events. There were limited pieces of merchandise available only during this event, along with special character greetings, parades, and dance parties. A distinctive nighttime spectacular called “Celebrate the Magic” also began during this celebration, and lasted all summer, lighting Cinderella’s Castle with summer-themed images from Disney movies Lilo and Stitch and The Little Mermaid, with a few others. Sweet monster-themed treats were available as part of the celebration, including a Mike Wazowski cake-pop.

May 23, 1997 – The Light Magic Nighttime Show Begins its Run at Disneyland

“…to dream and to believe that those dreams can come true.”

On May 23, 1997, the nighttime street show Light Magic began its run in Disneyland, replacing the Main Street Electrical Parade. Much like its predecessor, Light Magic was a show presented on four floats, each 80 feet long and 11 feet wide, and featured lights, special effects, and, of course, Disney characters. The show began between the “it’s a small world” attraction and the Matterhorn, and made its way down Main Street. It ended its run on September 1, 1997.

“Come out of orbit and refuel at this futuristic quick-service ‘spaceport’ where you’ll find out of this world Italian fare.”

On May 22, 1998, the quick-service restaurant Redd Rockett’s Pizza Port opened in Disneyland’s Tomorrowland. The restaurant was built in the location of the former attraction Mission to Mars, and retains some of the area’s early elements, including original posters of past Tomorrowland attractions, and a replica of the original Moonliner rocketship. Guests can stop at one of three stations for food: pizza, pasta, and salads, with menus featuring Orion Hawaiian Pizza and Countdown Chicken Fusilli.