May 30, 1953 – The Donald Duck Short Film Don’s Fountain of Youth is Released to Theaters 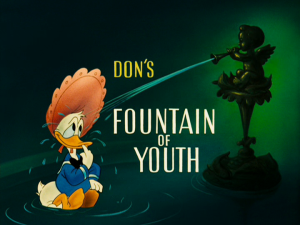 On May 30, 1953, the Donald Duck short film Don’s Fountain of Youth was released to theaters. It was directed by Jack Hannah, with story by Ralph Wright.

Donald is taking the nephews through a tour of the Florida everglades. He is angered that all the boys want to do is read comics, ignoring the scenery around them, but they throw a tantrum when Donald takes their comic book away. Donald then notices that the car is overheating, and rushes to get some water from a nearby spring. As he grabs the water, he notices a nearby sign stating: “This spring was mistaken for the Fountain of Youth by Ponce de Leon 1512.” He gets an idea to play a prank on the boys, and rips off half of the sign, leaving it marking the spring as the Fountain of Youth. Donald then sits in the spring, and pretends to have regressed back to a baby. The boys are dismayed at this, and start calling their uncle a spoiled brat. Upping the ante, Donald grabs an egg from a nearby alligator, and hides in the woods, watching the boys think he’s returned to an egg. The boys cry over their “misfortune.” The alligator wakes up and, spying its missing egg, starts chasing the boys, who frantically try to save their “Uncle Donald.” 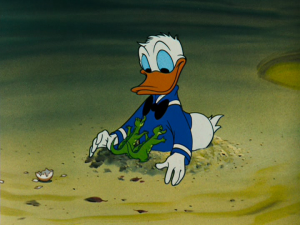 The alligator hatchlings mistakenly think that Donald is their mother, much to Donald’s dismay

Donald has been knocked out by the alligator’s tail, and lands on her nest, warming her remaining egg. The egg the boys were protecting is knocked from their hands and lands in front of Donald, and both eggs hatch simultaneously. Thinking Donald is their mother, the hatchlings cling to him, although he tries to get away from them. The alligator hears her babies’ cries and starts chasing Donald instead. He manages to escape her by climbing up a tree, which she soon chops down with her teeth. Donald lands on the ground and collapses, and the boys, mourning their uncle, are relieved to find him alive and back to his old self. Donald quickly gathers his nephews and makes a break for it, leaving behind two very heartbroken hatchlings. Fortunately, they find their mother, who calls them close by imitating Donald’s voice.

Posted in Uncategorized and tagged 1950s, Color, Donald Duck, Short film. Bookmark the permalink.
← May 29
May 31 →