May 31, 2012 – Landscape of Flavors Opens in Disney’s Art of Animation Resort 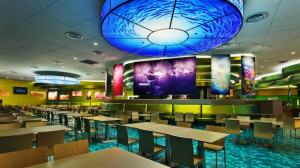 “The amazing world of creativity and innovation of Disney animation will draw you into Landscape of Flavors – five mini-restaurants under one roof at Disney’s Art of Animation resort.”

On May 31, 2012, the food court area Landscape of Flavors opened in Walt Disney World’s Art of Animation resort. Comprised of five stations, the menu ranges from pizza and pasta, to Mongolian grilled fish. The menu is also separated into breakfast versus lunch and dinner. The area’s decor is inspired by the landscape art for the animated feature film The Lion King.

“Seduce your sweet tooth, indulge your cravings and give in to your innermost desires with a tantalizing stop at this artisanal French shop.”

On May 30, 2013, the specialty ice cream shop L’Artisan des Glaces opened in the France Pavilion of Epcot’s World Showcase. The shop offers house-made ice creams in a variety of flavors ranging from cinnamon with caramelized pecans to milk chocolate and orange. The store also offers Artisan’s Specials, including the Croque Glacé: a scoop of ice cream with sauce pressed in a homemade brioche bun.

May 29, 2008 – Buzz Lightyear Will Fly on the Space Shuttle Discovery

“An eighth space ranger won’t have a seat at all. In fact, he will be packed tight inside a box and won’t even get to enjoy the ride up. But it’s nothing veteran spaceman Buzz Lightyear can’t overcome.”

On May 29, 2008, NASA formally announced that a new member would be joining the crew of the space shuttle Discovery: a 12-inch tall figure of Toy Story character Buzz Lightyear. Part of a joint effort between NASA and Disney Parks, Buzz was chosen to help encourage and foster an interest in children the studies of science, technology, and mathematics. The partnership also features an online program called Space Ranger Education Series, which helps teach kids more about the math and science behind space exploration. The Discovery launched into space on May 31. 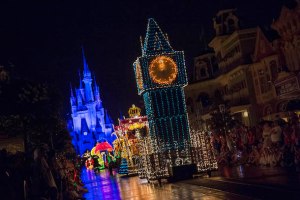 “Ladies and gentlemen, boys and girls…”

“Indulge in the art and culture of the Na’vi while dining inside this former RDA mess hall, only at Pandora – The World of Avatar.”

On May 27, 2017, the fast casual restaurant Satu’li Canteen opened in Disney’s Animal Kingdom’s newest expansion area Pandora – The World of Avatar. The restaurant features an internationally-inspired menu full of healthy dishes that include various proteins, grains, and plenty of vegetables. It also features a specialty dessert of Blueberry Cream Cheese Mousse with a passion fruit curd.

“Are you ready to see your favorite Disney•Pixar characters LIVE! at one of the most magical places on earth?”

On May 26, 2017, the live concert event The Music of Pixar LIVE! A Symphony of Characters began its run in Walt Disney World’s Hollywood Studios Park. This limited-time concert showing featured a full orchestra performing songs and score pieces from Pixar films, accompanied by character appearances of Woody, Jessie, and the Incredibles, among others. The show was performed at three different times each night, following the performances of Beauty and the Beast – Live on Stage at the Theater of the Stars.

May 25, 1983 – The Village Haus Restaurant Opens in Disneyland

“Hi diddle-dee-dee, an actor’s life for me.”

On May 25, 1993, the Village Haus Restaurant opened in Disneyland’s Fantasyland area. Based on the animated feature Pinocchio, and first known as the Village Inn Restaurant, the menu featured quick-service dishes, including flatbread pizza, burgers, and grilled chicken. On February 24, 2017, the restaurant was changed to become the Red Rose Tavern, and changed to promote the upcoming live-action feature film Beauty and the Beast.

May 24, 2017 – Pandora – The World of Avatar is Dedicated at Disney’s Animal Kingdom

“Now, anyone who has ever dreamed of visiting this extraordinary world can explore the astonishing landscape and ecosystem, soar on the back of a banshee and actually become part of the Avatar adventure.”

On May 24, 2017, the new area of Disney’s Animal Kingdom Park, known as Pandora – The World of Avatar, was officially dedicated. Based on James Cameron’s hit film Avatar, the area brings the world of Pandora to life, where guests can explore the rainforests by sailing down the Na’vi River, hike among the Valley of Mo’ara, and fly across the sky on the back of a mountain banshee. This area covers 12-acres of the Walt Disney World Park, and took several years, and a collaboration between Disney and Lightstorm Entertainment, to come to life. The dedication ceremony featured James Cameron and Disney CEO Bob Iger as they introduced the park and opened it up to guests. 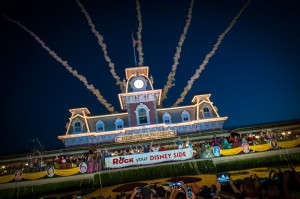 On May 23, 2014, the 24-hour Disney Park event “Rock Your Disney Side” kicked off in Walt Disney World’s Magic Kingdom Park, Disneyland Park, and Disney California Adventure Park. Guests were encouraged to embrace their “Disney Sides,” particularly if they were showing their #Heroside or #Villainside. The event began at 6:00 am in the parks’ respective time zones, and featured special character meet and greets, including an appearance by villain Maleficent.

“As the newest star pilot to join the fleet, the time has come for you to take to the sky.”