“Information for Learners of All Ages”

On October 3, 1998, the Epcot Discovery Center (formally known as Epcot Outreach and Epcot Teacher’s Center) was officially closed. Opening on July 1, 1994, the area was another educational outpost where guests could ask questions about some of the subjects on display in the Epcot centers, or even questions about Walt Disney World in general. Guests were also able to take home a variety of informational resources.

On September 29, 2010, the name change of Downtown Disney to Disney Springs was made official. The name change was confirmed with the new website disneysprings.com and the Twitter account @DisneySprings, and the opening of two dining experiences: The Landing: Jock Lindsey’s Hangar Bar and Morimoto Asia. The area’s transformation was announced in 2013, which included a renovation and expansion of the entire area.

On September 28, 2009, the Disney Parks Blog, the official blog for all things Disney parks, launched. It was noted as the official source of the latest information of all the parks worldwide, as well as tidbits of history from Imagineers and other cast members that make the parks magical. Guests can register for an account and comment on posts, providing feedback and questions for the panel of moderators.

September 22, 2011 – The Walkthrough Attraction The Revenge of the Headless Horseman Opens in Hong Kong Disneyland

“Get ready to ‘lose your head’ at Disney’s Haunted Halloween.”

On September 17, 2019, the new Tomorrowland marquee was installed in Walt Disney World. The old sign had been taken down in July, and the new sign is a simple, sleek design evoking the styles seen in modern-day innovative hubs, such as Google or Apple. 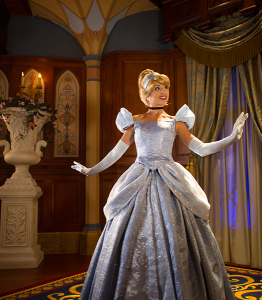 “Enjoy a dazzling encounter with Cinderella and Elena in an enchanting royal setting.”

On September 12, 2013, the meet-and-greet area Princess Fairytale Hall opened in Walt Disney World’s Magic Kingdom Park, in Fantasyland’s Castle Courtyard. Guests enter what appears to be a secret part of the castle, and are able to see special stained glass windows of Cinderella and the Royal Gallery before being escorted to meet Cinderella and a special guest; the special guest has been permanently selected as Princess Elena from Elena of Avalor. The attraction took the place of the Snow White’s Scary Adventures attraction.

September 10, 2007 – The Shuttle Crew of the Endeavour is Honored in Walt Disney World 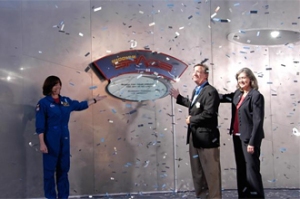 “The seven space shuttle Endeavour astronauts who returned to Earth Aug. 21 will be honored in a day of ceremonies at Walt Disney World, Lake Buena Vista, Fla., on Sept. 10.”

On September 10, 2007, the seven astronauts that flew on the NASA flight Endeavour were honored in Walt Disney World with a whole slew of celebrations and events. This day included media interviews, a plaque dedication, and a parade down Main Street, U.S.A. An educational program within the series of events featured students from nearby schools, and was streamed live over NASA’s website.

On September 6, 2004, the Circle-Vision attraction Le Visionarium closed in Disneyland Paris. Opening on April 12, 1992 in Discoveryland, the attraction combined the film From Time to Time with the Audio-Animatronics of 9-Eye and the Timekeeper; this was the first attraction in a Disney park to combine the two.

On September 5, 2000, the high-speed Tomorrowland attraction Rocket Rods closed in Disneyland. Opening on May 22, 1998, it was built to replace the PeopleMover attraction, and at the time was the fastest attraction in Disneyland. Unfortunately, the attraction closed often due to malfunctions, which led to its inevitable closing.