“We’re thrilled to welcome to the Disney family the talented team at Marvel.” – President and CEO of the Walt Disney Company Bob Iger

On December 31, 2009, a special meeting was held for the stockholders of Marvel Entertainment, Inc., where the planned merger with The Walt Disney Company was front and center for approval. With the approval of the shareholders, Marvel became a Disney-owned subsidiary, with Marvel shareholders receiving $30 a share along with a 0.7452 Disney share for each Marvel stock owned. The merger was completed the same day following the approval.

“We are grateful that the Disney Worldwide Conservation Fund was able to help ABR care for the cubs orphaned due to the mass crop failure.” – ABR Board President Jack Burgin

On December 30, 2011, it was announced that the Disney Worldwide Conservation Fund gave a $5000 grant to the Appalachian Bear Rescue (ABR). This grant was to help the ABR in its mission of assisting the feeding and care of orphan bear cubs within the organization. In 2011, due to a shortage of food supplies in the wild, ABR took in 33 orphaned black bear cubs; ABR will take care of these cubs until they are able to return to the wild.

On December 29, 1954, the Disneyland episode “Beaver Valley/Cameras in Africa” premiered in ABC. Part of the Disney anthology series, this episode showed an edited version Disney’s True-Life Adventure featurette Beaver Valley along with some behind the scenes footage of the filming for The African Lion. The footage for the latter segment included a look with Alfred and Elma Milotte, who shot many of the True-Life Adventures for the company, as they film many of Africa’s wildlife. The African Lion would go on to premiere in theaters on September 14, 1955. This episode would eventually be rerun under the title “Cameras in Africa/Beaver Valley.”

“This is the greatest marathon I’ve ever seen.”

December 27, 1926 – The Alice Comedy Alice the Lumber Jack is Released to Theaters 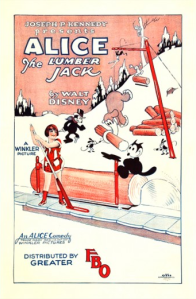 On December 27, 1926, the Alice Comedy Alice the Lumber Jack premiered in theaters. It was the 40th Alice Comedy released, and the 24th to star second Alice actress Margie Gay. It has since been classified as a lost film, along with many of the other latter Alice Comedies.

On December 26, 1927, the Oswald the Lucky Rabbit short film Rickety Gin premiered in theaters. It was the tenth Oswald short film to be released, and was animated by Ub Iwerks and Friz Freleng. The short has since been classified as a lost film.

On December 25, 1955, the Mike Fink Keel Boats attraction opened in Disneyland’s Frontierland area. Based on the Davy Crockett episode “Davy Crockett’s Keel Boat Race,” the two boats were named the Gullywhumper and the Bertha Mae for characters Mike Fink and Davy Crockett. The attraction originally closed in 1994, but were reopened in early 1996. The Disneyland attraction was officially closed on May 17, 1997. Versions of this attraction also opened in Walt Disney World in 1971, closing in 2001; and Disneyland Paris in 1992 (renamed the River Rogue Keelboats), which runs as a seasonal attraction. 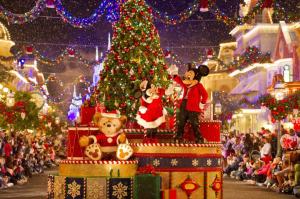 On December 24, 2001, the Spanish-language special Navidad Mágica Disney premiered on Univision. The hour-long special featured popular entertainers Bobby Pulido, Daniela Aedo, and Myra, performing from the four parks that make up Walt Disney World. Subsequent versions of this broadcast have been shown on Disney Channel in Spanish speaking countries.

“Join us in celebrating the rich imagination and innovation behind animated storytelling.”

On December 23, 2015, the Disney & Pixar Short Film Festival premiered in Epcot’s Magic Eye Theater. The short film festival gives a new 4D experience to three short films: Get a Horse, For the Birds, and La Luna. The theater used to host the likes of Captain EO and Magic Journeys.

December 22, 1954 – The Disney Anthology Episode “A Present for Donald” Premieres 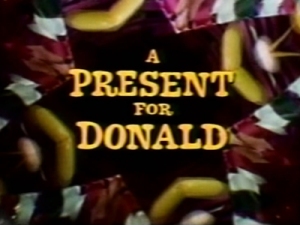 On December 22, 1954, the Disney Anthology episode “A Present for Donald” premiered on ABC. The episode is a holiday special, and features segments from the animated feature film The Three Caballeros, though Donald is receiving Christmas presents rather than birthday presents.