“Brace yourself for eerie encounters with spooky star fields and menacing meteors.”

On December 25, 1955, the Mike Fink Keel Boats attraction opened in Disneyland’s Frontierland area. Based on the Davy Crockett episode “Davy Crockett’s Keel Boat Race,” the two boats were named the Gullywhumper and the Bertha Mae for characters Mike Fink and Davy Crockett. The attraction originally closed in 1994, but were reopened in early 1996. The Disneyland attraction was officially closed on May 17, 1997. Versions of this attraction also opened in Walt Disney World in 1971, closing in 2001; and Disneyland Paris in 1992 (renamed the River Rogue Keelboats), which runs as a seasonal attraction. 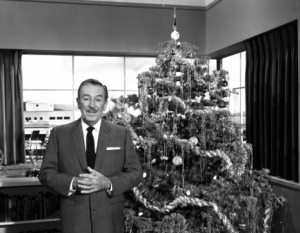 “The quick cuts from Walt to Goofy did the trick and showed how much this man’s life became his art.” – Executive Producer Craig Murray

On November 27, 2009, the special seasonal film Christmas with Walt Disney premiered at the Walt Disney Family Museum. Directed by Don Hahn, the exclusive to the museum film gives guests a chance to see how Walt celebrated Christmas within his various works, and with his family. The film is a mix of home movies, vintage commercials, and never-before-seen clips that were cut from various projects. The film is narrated by Walt’s daughter Diane Disney Miller. It has since been shown seasonally at the museum through the month of December.