February 28, 2016 – Inside Out Wins Academy Award for Best Animated Feature

“We are so lucky. Not just us, but everyone in this room because regardless of gold man or not, we get to make stuff.”- Pete Docter

On February 28, 2016, the 88th Annual Academy Awards were held at the Dolby Theatre in Los Angeles, California. Nominated for two awards, the Pixar animated feature Inside Out scored one award in the form of Best Animated Feature. The film won against such films as Paramount Pictures’ Anomalisa, Espaço Filmes Boy and the World, Aardman Animations’ Shaun the Sheep Movie, and Studio Ghibli’s When Marnie was There.

“When you wish upon a star, your dreams come true.”

On February 27, 1941, the 13th Annual Academy Awards were held at the Biltmore Hotel in Los Angeles, California. Disney’s second animated feature Pinocchio became the first animated feature film to win competitive Academy Awards, scoring two for its music: Best Original Score (Leigh Harline, Paul J. Smith, and Ned Washington), and Best Original Song for “When You Wish upon a Star” (Leigh Harline and Ned Washington). Both categories featured stiff competition, as the music was up against films such as Rebecca, The Thief of Bagdad, and Down Argentine Way.

“In 1928 [Walt Disney] created ‘Steamboat Willie’ introducing Mickey Mouse, and from that point there was no stopping the king of family entertainment in the U.S.”

On February 26, 1953, the 10th Annual Golden Globes were held at the Ambassador Hotel in Los Angeles, California. At this ceremony, Walt Disney was awarded the Cecil B. deMille award for his numerous contributions to the film industry, becoming the second recipient of this award after Cecil B. deMille himself. The award acknowledges the “outstanding contributions to the world of entertainment” made by the individual. 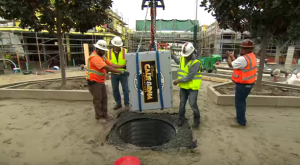 “It came from their hearts, all the pieces that are in here, and we’re really excited to be putting this in the ground right now to be opened in 25 years.” – Lisa Girolami, Senior Show Producer, Walt Disney Imagineering

On February 25, 2012, Walt Disney Imagineers and Disney cast members buried a special time capsule on Buena Vista Street in Disney’s California Adventure Park. The capsule, which is to be opened in 2037, featured several interesting items, including PhotoPass Cards, a Blackberry, and a Duffy bear. A special plaque was placed over the spot where the capsule was buried.

On February 24, 2008, the 80th Academy Awards were held at the Kodak Theater in Los Angeles, California. Though receiving five nominations, Pixar’s animated feature film Ratatouille walked away with one: Best Animated Feature. This award gives Pixar its third Academy Award in this category. The film won against Marjane Satrapi and Vincent Paronnaud’s Persepolis and Ash Brannon and Chris Buck’s Surf’s Up.

On February 23, 2000, the 42nd Grammy Awards were held at the Staples Center in Los Angeles, California. Among the winners of the night was Phil Collins and Mark Mancina for their work on the soundtrack for the Disney Animated Feature Film Tarzan; the pair were also the first to win this award, as it was established at this ceremony. The album won against American Beauty, Austin Powers: The Spy Who Shagged Me, The Matrix, and The Prince of Egypt. 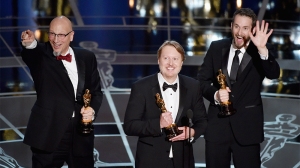 “We would really like to thank the Academy for honoring our film…this has been an amazing year for animated films, and we are privileged to be in your company.” – Don Hall, Co-Director for Big Hero 6

On February 22, 2015, the 87th Academy Awards were held at the Dolby Theatre in Los Angeles, California. Walt Disney Animation Studios walked away with the Academy Award for Best Animated Feature for the movie Big Hero 6, giving the studio its second Academy Award in this category after the previous year’s win for Frozen. The film was the winner against such films as The Boxtrolls, How to Train Your Dragon 2, Song of the Sea, and The Tale of the Princess Kaguya.

February 21, 1927 – The Alice Comedy Alice’s Rodeo is Released to Theaters 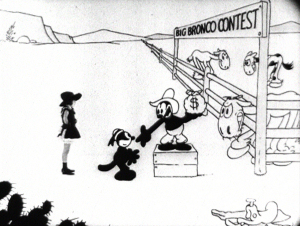 On February 21, 1927, the Alice Comedy Alice’s Rodeo premiered in theaters. The short was also released with an alternate title of Alice at the Rodeo. It was the 44th Alice Comedy produced, and the 28th to star second Alice actress Margie Gay. Although not classified as a lost cartoon, the short has not been released for home viewing.

“The THINK exhibit features stories and engaging experiences that appeal to Epcot guests from around the world.”- Lee Green, VP Brand Experience and Strategic Design, IBM

On February 20, 2013, in conjunction with National Engineers Week, the new attraction IBM THINK was unveiled in Epcot’s Innoventions West area. The interactive attraction aims to teach guests about the way the world can work alongside technological innovations. To also celebrate National Engineers week, IBM was on hand to provide nearby high school teachers and students with free STEM lesson plans on iPads and Android tablets.

“Today, we are excited to give you an update on the Captain’s return!”

On February 19, 2010, the official reopening date for the Captain EO attraction was announced by Disney Parks, with the official date being February 23, 2010. The film was originally announced in late 2009 to be returning to Disneyland, but with no firm date set; more information about the release was announced in the February update. The film would return to the Tomorrowland Theatre with an updated 70mm print, along with acoustic updates that were made to the theatre since the film’s last showing in 1997.