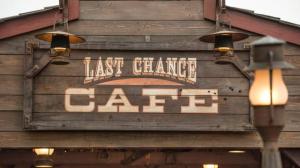 “Trek your little outlaws for a place to lay low and fill up on some tasty Tex-Mex tucker.” 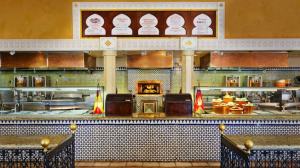 On December 12, 2003, the quick-service restaurant Nautilus Galley opened in Tokyo DisneySea’s Mysterious Island area. Built across from Captain Nemo’s submarine, this restaurant keeps in the theme of the area and offers snacks and drinks for guests to enjoy. Menu items include an assorted snack bowl, gyoza dogs, and assorted drinks. The menu also includes specialty items for the park’s events, such as items for Christmas and Halloween. 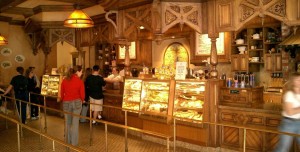 On April 6, 1990, the Blue Ribbon Bakery quick service shop opened in Disneyland on Main Street. The shop took the place of the long-running Sunkist Citrus House, which had opened on July 31, 1960, and closed on January 3, 1989. The bakery served several kinds of pastries with coffee for breakfast, and a variety of sandwiches for lunch, along with several Disneyland-famous desserts for any time of day. The bakery was moved to where the former Carnation Ice Cream Parlor was located in 1997, and eventually was closed on January 5, 2012.

“If you need an afternoon pick-me-up, head to Blue Ribbon Bakery on Main Street, U.S.A., for an iced coffee or mocha (you can add a white chocolate macadamia nut cookie, that’s up to you).”

On April 6, 1990, the Blue Ribbon Bakery opened on Disneyland’s Main Street. The quick service bakery replaced the Sunkist Citrus House, which closed in early 1989 after opening in 1960. The bakery specialized in specialty pastries and coffee, including the Matterhorn Macaroon and the Soundsational Cupcake. In 1997, the bakery was moved to the location of the former Carnation Ice Cream Parlor; on January 5, 2012, the Blue Ribbon Bakery was officially closed, with its space being used as an expansion for the Carnation Café. Pastry lovers are now able to go to Jolly Holiday Bakery on Main Street.

“An Art Deco setting features film posters of past and present as movie trailers play on TVs.”

On December 16, 1990, The Commissary restaurant opened in Hollywood Studios. The quick-service restaurant is decorated in an Art Deco style, reminiscent of the style of Old Hollywood. Its menu features popular dishes such as a chicken club, New York strip steak, and roasted salmon. On July 1, 1997, the restaurant was renamed ABC Commissary, named after the Disney owned television channel, and features trailers and behind-the-scenes looks of popular ABC shows on its many television screens. 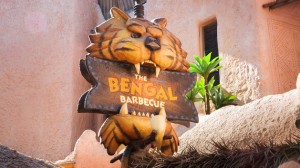 “Tear into some toothsome jungle skewers at this quick-service stand.”

On June 4, 1990, the quick-service restaurant The Bengal Barbecue opened in Disneyland’s Adventureland. The restaurant features “jungle skewers” in several varieties, including beef, chicken, and vegetable. The restaurant also features several other snacks, including a fruit cup and a Mickey Mouse pretzel. It has received relatively good reviews from park guests.

“Come out of orbit and refuel at this futuristic quick-service ‘spaceport’ where you’ll find out of this world Italian fare.”

On May 22, 1998, the quick-service restaurant Redd Rockett’s Pizza Port opened in Disneyland’s Tomorrowland. The restaurant was built in the location of the former attraction Mission to Mars, and retains some of the area’s early elements, including original posters of past Tomorrowland attractions, and a replica of the original Moonliner rocketship. Guests can stop at one of three stations for food: pizza, pasta, and salads, with menus featuring Orion Hawaiian Pizza and Countdown Chicken Fusilli.