On September 8, 2014, the newly revamped Jungle Cruise attraction, renamed Jungle Cruise: Wildlife Expeditions opened in Tokyo Disneyland. Originally opening in the park on April 15, 1983, the attraction underwent a variety of changes, including new lighting and special effects, as well as original music to accompany the ride. Guests can also take a nighttime cruise with a “thrilling atmosphere” and special nighttime elements.

On July 8, 2008, the popular shop Bibbidi Bobbidi Boutique opened in Tokyo Disneyland. Originally opening in Walt Disney World on April 5, 2006, the store is a salon that styles girls to look like princesses. Little girls can pick from one of seven packages, ranging from being styled like Anna and Elsa from Frozen, to a premium Cinderella package that features a special dress. This was the third version of the salon to open in Disney parks, with others opening in Walt Disney World’s Magic Kingdom, Disneyland, Hong Kong Disneyland, and Shanghai Disneyland.

May 16, 1986 – The Magic Carpet ‘Round the World Film Attraction Closes in Tokyo Disneyland

On May 16, 1986, the last version of the film attraction Magic Carpet ‘Round the World closed in Tokyo Disneyland. Originally premiering in Walt Disney World on March 16, 1974, it moved to Tokyo Disneyland’s Tomorrowland area on April 15, 1983, complete with new footage of Europe and the United States. The film has not been shown since this closing.

May 10, 2010 – The Attraction MicroAdventure! Closes in Tokyo Disneyland

On May 10, 2010, the 3-D film attraction MicroAdventure!, a revised version of the Honey, I Shrunk the Audience attraction from Epcot, officially closed. Having been open since April 15, 1997, the Japanese attraction featured new sequences that would appeal to Japanese audiences. The attraction had been sponsored by the Japan Credit Bureau, and was replaced by the Captain EO Tribute.

On March 12, 2011, Tokyo Disneyland and Tokyo DisneySea Park closed to examine the damage caused by the Touhoku earthquake that occurred the day prior. When the earthquake hit, 69,000 people were reportedly stranded at the parks, with most guests able to vacate by the next day. As park operational calendars were updated with closings through the 21st of March, crews were brought in to assess the damage. Flooding and caved pavements were spotted throughout the park, and were subsequently fixed before the parks eventually reopened on April 28, 2011; this was the longest closing of any Disney park.

On November 22, 2016, the quick service restaurant Camp Woodchuck Kitchen opened in Tokyo Disneyland’s Westernland area. The name is based on the Junior Woodchuck group of which Donald Duck’s nephews Huey, Dewey, and Louie were members, and is themed like an American summer camp; the restaurant is also located where guests are able to watch the canoes on the Rivers of America. The restaurant’s menu features waffle sandwiches, smoked turkey legs, and hot ginger lemonade.

November 3, 1998 – The Skyway to Tomorrowland Attraction Closes in Tokyo Disneyland 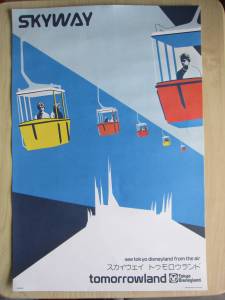 “See Tokyo Disneyland from the air”