“The actor’s considerable banjo-playing skills were in the spotlight, but his comedic talents pop in as well before a delighted near-capacity audience.”

On October 28, 2009, Disney Legend, songwriter, and comedian Steve Martin performed with the Steep Canyon Rangers at a sold-out show at the Walt Disney Concert Hall. Martin was promoting his new album The Crow: New Songs for the Five-String Banjo, which had reached the top of the Bluegrass Album charts. Martin, straddling the line between stand-up routine and banjo concert, entertained the crowd with his own compositions and a few bluegrass standards. Martin was also joined by fellow banjo player and songwriter Abigail Washburn for a 40-minute set.

July 15, 2011- The 51st Animated Feature Film Winnie the Pooh is Released to Theaters 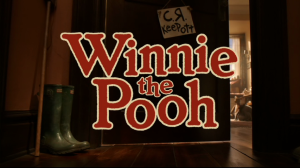 “But his favorite things are his stuffed animals. Ah, there they are now: a charming and eccentric cast of characters. And his best friend among them is a bear named Winnie the Pooh, or Pooh, for short. Together, they had many unusual adventures that all happened right here in the Hundred Acre Wood.”

On July 15, 2011, the 51st animated feature film Winnie the Pooh was released to theaters. Based on the stories by A. A. Milne, this is the second film in the Disney animated canon to feature Winnie the Pooh and his friends. Although the film was critically acclaimed, it only made a small amount at the box office, due to its unfortunate timing of opening the same weekend as the last Harry Potter film. The film drew inspiration from three different stories: “In Which Eeyore Loses a Tail and Pooh Finds One,” “In Which Piglet Meets a Heffalump,” and “In Which Rabbit Has a Busy Day and We Learn What Christopher Robin Does in the Mornings.” The music for the film was written by Robert Lopez and Kristen Anderson-Lopez, and performed by actress Zooey Deschanel, with Deschanel’s band She & Him writing the end-credit song. The story was written by Stephen J. Anderson, Clio Chiang, Don Dougherty, Don Hall, Brian Kesinger, Nicole Mitchell, Jeremy Spears, and Kendelle Hoyer, and was directed by Stephen J. Anderson and Don Hall. It stars John Cleese as the narrator, Jim Cummings as Pooh and Tigger, Travis Oates as Piglet, Tom Kenny as Rabbit, Craig Ferguson as Owl, Bud Lackey as Eeyore, Jack Boutler as Christopher Robin, Kristen Anderson-Lopez as Kanga, and Wyatt Hall as Roo.

The movie opens in the room of Christopher Robin, with the narrator introducing his stuffed animals, including his bear Winnie the Pooh, and explains that Christopher Robin and his friends had many adventures together. The adventure begins with the first chapter of the book, “In Which Winnie-the-Pooh has a Very Important Thing to Do.” The narrator catches Pooh asleep in bed, reminding him that he must wake up as he has a very important thing to do. Pooh excitedly searches for honey, but soon realizes he is out of honey. He comes across Eeyore, glum as always, and discovers that Eeyore’s tail is missing. Owl then flies by, landing in the tree where he was hatched and begins to write his memoirs. Pooh asks for Owl’s help to find Eeyore’s tail, and Owl agrees, suggesting they give out an award for finding Eeyore’s tail. Pooh then sends out messages that there’s “a very important thing to do,” and everyone gathers with Christopher Robin. 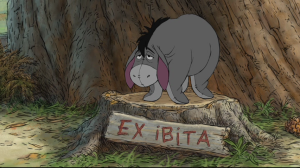 As everyone gathers, Christopher Robin explains the situation, declaring a contest for finding the tail. Pooh comes up with the idea of a large pot of honey for the winner, and the search is on. Pooh puts a cuckoo clock on Eeyore’s end in place of its tail, and is declared the winner, until Eeyore sits on the clock and smashes it. Piglet suggests a balloon, but this doesn’t work well either. The group tries and tries until they run out of things to try, until Kanga gives Eeyore her scarf as Eeyore’s new tail. Pooh is disappointed he didn’t win the honey, and wanders the woods, until he comes across a loose thread, finding that Eeyore’s tail has unraveled. As Pooh continues to Christopher Robin’s, he finds a note at the front door and takes it to Owl’s to read. Although the note says that Christopher Robin will be “back soon,” Owl interprets the letter as their friend being captured by a creature known as “the Backson.” Rabbit comes up with the idea to catch the Backson and save Christopher Robin.

Piglet digs the pit and Pooh assists in setting the trap for the Backson, and the rest of the group sets up the Backson bait. Tigger, however, goes deep into the woods to capture the Backson himself, but ends up catching Eeyore instead. Tigger, in an effort to cheer Eeyore out, takes the donkey under his wing to “Tigger-ize” him, which includes Tigger dressing up as the Backson and attempting to have Eeyore pounce him. In the end, howeverr, Eeyore hides from Tigger, having had enough of the lessons. As Pooh and Piglet continue setting up, Pooh gets the idea to send Piglet up a tree to retrieve a beehive, which ends with the bees chasing the pair across the woods. As everyone continues to prepare the trap, Pooh continues to think only of honey, and how hungry he is. As he is distracted by his daydream of honey, he falls into the pit for the Backson. The rest of the team searches for Pooh and, hearing Pooh’s groaning from the pit, thinks they caught the Backson. They realize Pooh is in the pit, and come up with a plan to save him, only to get caught in the pit themselves, save for Piglet. Piglet is tasked with getting everyone out of the pit, and nervously looks at the woods. 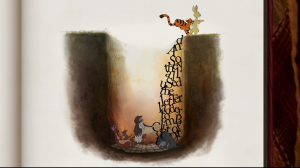 As Piglet travels through the woods to get Christopher Robin’s jump rope to pull everyone from the pit, he comes across Tigger, who is still dressed like the Backson. They both quickly flee the woods, and Piglet knocks into the narration of the book, sending letters flying all over the place before landing into the pit. Tigger, seeing Eeyore again, tries to convince him to be a Tigger again, when Eeyore claims that “the very best thing about Tiggers is you’re the only one,” which makes Tigger very happy. As Rabbit despairs being caught in the hole, Pooh spies the honey pot at the top, and uses the fallen letters to create a ladder to reach it, effectively helping everyone escape the pit. After they escape, Christopher Robin comes through the trees, letting the group know that he wasn’t taken by any Backson, but that his note said “back soon,” indicating that he’d been at school and would be returning soon.

Still hungry, Pooh continues to search, arriving at Owl’s house. When he rings Owl’s bell, he notices that Owl’s bell rope looks awfully familiar. Pooh is distracted by Owl’s offer of honey, but goes back to the bell rope and takes it from Owl, vowing to return it to Eeyore. Owl still offers him honey, but Pooh refuses, knowing that his friend comes first. Christopher Robin quickly attaches the tail, and awards Pooh with a giant pot of honey. Afterwards, Christopher Robin and Pooh go walking through the woods hand in hand. 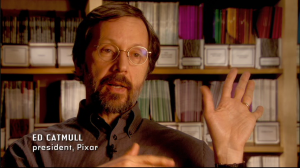 On March 31, Edwin Earl Catmull was born on March 31, 1945, in Parkersburg, West Virginia. Although he loved to draw from an early age and dreamed of becoming an animator, he believed early on that he didn’t have the talent necessary, and decided to study physics and computer science at the University of Utah. Around the country at that time, funding was given to select universities to pursue computer science, and Catmull participated in one of the first labs in computer graphics. In this lab, Camtull created a short computer-animated film of his own left hand, which ultimately helped in the development in creating curved surfaces and eliminating jagged edges. This film was inducted into the National Archives in December, 2011 as a ground-breaking work. In 1974, Catmull graduated with his PhD. Soon after graduation, Alexander Schure, founder of the New York Institute of Technology, hired Catmull as the head of the computer graphics department in the hopes of creating new tools and products to create computer animation. There, Catmull met Alvy Ray Smith, who became a close collaborator and friend for many years. At NYIT, Catmull and his research group developed several tools that would allow animators to draw and paint directly into the computer, including Tween, Paint, and SoftCel.

The work being done by Catmull and his team was noticed by George Lucas, who hired Catmull to form a new computer division at Lucasfilm. Catmull accepted the offer, and in 1979, he became the Vice President of the computer graphics division. Catmull and Smith, however, were still working toward the goal of a completely computer animated full-length film. Tom Porter, technical director at Pixar noted that, “…Ed and Alvy realized, in order to get in the game, we’ve got to put characters up on the screen, and that meant character animation, and that changed everything right there.” As luck would have it, Catmull ran into John Lasseter at a conference, and Catmull jumped at the chance to bring a real animator to Lucasfilm to help realize the dream of a computer animated film. With Lasseter, the group created the short film The Adventures of Andre and Wally B., along with new software to replicate the squash and stretch movements of traditional animation, which was well received at the 1984 SIGGRAPH conference. Catmull and the team also developed the most powerful graphics computer of the time: the Pixar Image Computer. However, sales of this computer were stagnant, as the software was only sold in limited markets. Catmull and Smith, with Lucas’ blessing, spun off the computer division as Pixar, and struggled to find an investor. 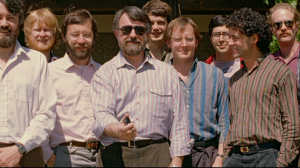 Catmull (L) with the rest of the Pixar team from Lucasfilm

In 1986, their prayers were answered when Steve Jobs heard of Pixar. “That was the first time I met Ed [Catmull], and he shared with me his dream to make the world’s first computer-animated film. And I, in the end, ended up buying into that dream, both spiritually and financially,” Jobs shared in an interview. He launched Pixar, and Catmull was named as Chief Technical Officer. He also helped develop the RenderMan system used in Toy Story and Finding Nemo. In 2006, when Disney acquired Pixar, Catmull was then named the President of Pixar and Disney Animation, and with Lasseter, the two were put in the prime position of bringing the art of 2-D animation back to life. “Everybody at Pixar loves 3-D animation, you know, we helped develop it. But we also love 2-D animation, and to think that 2-D was shut down, and that [Pixar was] used as an excuse to shut it down was awful,” Catmull said about the decision of most animation studios shutting down their traditional animation studios. “We saw this art form being thrown away, so for us, it was just, it was a tragic time.” Bob Iger, CEO of the Walt Disney Studios, wanted to take the studio back to the glory days of animation, and knew that Pixar had the right people to do that. “While we will make 3-D movies, we’re also going to make 2-D movies, cause it’s part of this wonderful heritage that we’ve got here, and it’s a beautiful art form,” says Catmull. “It feels like this [partnership between Disney and Pixar] is the true culmination of the building of Pixar and this amazing company into something which will continue on and continue to make waves in the future.”