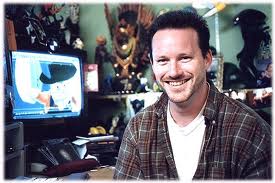 “Glenn is not gone from us. He’s still alive in all of us.”

On December 24, 1960, Glenn John McQueen was born in Toronto, Ontario, Canada. After graduating from Sheridan College in 1985, McQueen scored a scholarship to the New York Institute of Technology Computer Graphics Lab; this lab is notable for being the top computer lab for the development of computer animated films, with several future Pixar employees having studied there. McQueen himself would become a Pixar employee in 1994, where he became an animation supervisor for the films Toy Story; A Bug’s Life; Toy Story 2; and Monsters, Inc. He was noted for his brilliance in the field of animation, with John Lasseter calling him the “heart and soul” of the animation department. Unforutnately, McQueen passed away in 2002 during the development of Finding Nemo; the film was dedicated to his memory, as was the character of Lightning McQueen from the Cars franchise. When Pixar Canada opened, it was named the Glenn McQueen Pixar Animation Center in his honor.

“Now we take you to the world of computer animation, where director John Lasseter has proved that a boy with a hard drive can go a long way.” – Presenter Robin Williams

On March 25, 1996, the 68th Academy Awards were held in the Dorothy Chandler Pavilion in Los Angeles, California. At this ceremony, John Lasseter was awarded a special Academy Award for the creation of the first fully computer-animated feature film, Toy Story, calling its creation a milestone in the achievement of motion pictures. The film had been a long time in the making, going back to Lasseter’s aspirations after starting at Disney decades earlier. Lasseter showed up on stage to receive the award, bringing with him a Woody and a Buzz Lightyear toy. Lasseter thanked the Academy for its longtime support of student filmmakers, as well as everyone at Pixar and Disney for their support and effort into making the film.

May 12, 2007 – The Computer Animated Series My Friends Tigger and Pooh Premieres on Disney Channel 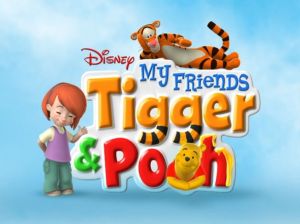 “My friends Tigger and Pooh, we’re always there for each other.”

On May 12, 2007, the computer animated series My Friends Tigger and Pooh premiered on the Disney Channel’s Playhouse Disney programming block. Based on the hit Winnie the Pooh series by A.A. Milne and popularized in film by Disney, the show features 6-year-old Darby and her dog Buster spending time with Winnie the Pooh and Tigger in the Hundred Acre Wood. The series ran for three seasons with 87 episodes, along with three direct-to-video films. The series was created by Bobs Gannaway, and starred Chloe Grace Moretz as Darby, Dee Bradley Baker as Buster, Jim Cummings as Winnie the Pooh and Tigger, Travis Oates as Piglet, Peter Cullen as Eeyore, Ken Sansom as Rabbit, Kath Soucie as Kanga, Max Burkholder as Roo, and Oliver Dillon as Lumpy.

“My ancestry isn’t all hamster, I’m one-sixteenth wolf with a little wolverine…”

On March 22, 2009, the special short film Super Rhino was released on the DVD release of the Disney animated feature film Bolt. It was written and directed by Nathan Greno, and stars Mark Walton as Rhino, Malcolm McDowell as Dr. Calico, Miley Cyrus as Penny, and Susie Essman as Mittens.

The short begins with Calico already touting his success as an evil villain, as he has caught Penny and Bolt and has them suspended over a large pit of lava. Through a camera in Bolt’s collar, Penny’s father is able to see their capture, and although he can’t save her, he knows who can: Rhino the hamster. Penny’s father uses his scientific contraptions to create a super hamster, and Rhino is soon sent to save the pair. He attacks all the guards outside, and makes his way into Calico’s fortress, exclaiming that he created a door with lasers from his eyes. Calico looks dumbfounded as he sees a hamster standing before him. Every guard shoots everything they can at Rhino, but the newly super Rhino is able to avoid the shot and rides a missile, using it to cut down Penny and Bolt, and safely catches them as they fall. Calico starts proclaiming that he will win next time, but Rhino interrupts him and, using his own version of the “super bark,” sends a wave of lava flying over Calico, burning him and his cat. Penny and Bolt thank Rhino, who calls the two “cute,” before proclaiming he has an urgent matter to attend to. He is then seen at a concert, where he starts singing Hannah Montana’s song “Best of Both Worlds” to an adoring crowd. It is then revealed that he has been dreaming, and has woken up Mittens, who is not a fan of his singing. He rolls over and goes back to sleep, dreaming once again that he’s going to save the world after answering a call from the President of the United States.

“When we thought of Billy Crystal, we thought, this was going to be great. Of course, he just added his own unique spin to it.” – Pete Docter, Director of Monsters, Inc.

On March 14, 1948, William Edward Crystal was born in New York City. His father was a music promoter, and his uncle was Milton Gabler, a legendary music producer. Displaying a love of performing at an early age, Crystal and his older brothers would perform their own variety show for family members and at local events. After graduating from New York University’s Tisch School of the Arts in 1970, Crystal began his career in improv comedy, leading to a sketch on the first season of Saturday Night Live!. His breakout role was as Jodie Dallas on the sitcom Soap, which he played from 1977 through 1981. He rejoined Saturday Night Live! as a cast member during the 1984 – 1985 season, and then had an appearance in the series All in the Family, where he would meet actor and director Rob Reiner. Reiner hired Crystal for small parts in two films, This is Spinal Tap and The Princess Bride, which led to his being cast as the lead in When Harry Met Sally…. This film gave Crystal his first Golden Globe nomination for best actor.

Crystal was asked to be the voice of Buzz Lightyear in Pixar’s first full-length computer animated feature Toy Story, but he passed on the role, calling it one of the biggest regrets of his career. When he was offered the role of Mike Wazowski in Monsters, Inc., he jumped at the chance. He has since reprised the role in a short film, a cameo in Cars, and the prequel film Monsters University. Crystal also voiced the character Calcifer in the film Howl’s Moving Castle. Crystal continues to be active in entertainment, hosting the Academy Awards nine times, directing a made-for-television movie, and writing and starring in a one-man play called 700 Sundays. Crystal was named a Disney Legend in 2013.

“The best scientists and engineers are just as creative as the best storytellers.” – Steve Jobs

On February 3, 1986, the Pixar Animation Studios was founded by Ed Catmull, Alvy Ray Smith, and Steve Jobs. Its history goes back to 1979, when Ed Catmull was recruited by George Lucas to head Lucasfilm’s new Computer Division. In 1983, after being fired by Disney, Jon Lasseter was brought on to the graphics group of the Computer Division as an “interface designer,” with the goal of having Lasseter bring the group one step closer to the dream of creating a computer animated film. Working together, the group created the short film The Adventures of Andre & Wally B, which was shown at the computer graphics conference SIGGRAPH to critical acclaim for its groundbreaking software developed to create the squash-and-stretch and motion blur techniques. The group also created the Pixar Image Computer, used mostly in government and medical communities (although Disney purchased a number of computers for what would later become the Computer Animation Production System, or CAPS). However, although this software and computer were the most powerful and impressive of their day, Lucas’ interest in the company waned, as he didn’t want to run a company selling software. Catmull and Smith gained Lucas’ blessing to spin off the company and call it Pixar, and found an investor in entrepreneur Steve Jobs, who invested $10 million into the struggling group.

In 1987, Pixar’s short film Luxo Jr. became the first 3D computer animated short film to be nominated for an Academy Award, and the lamp became the symbol of the company; in 1989, Pixar would win an Academy Award for their short film Tin Toy. To keep the company afloat while still working toward their dream, Pixar did commercial work for companies like Tropicana and Trident Gum. Pixar was then able to work on a collaborative effort with Walt Disney Studios, helping develop CAPS further, and Pixar also developed RenderMan, which became an industry standard in computer graphics. Despite all these technical advancements, the company was not able to make a profit, and Jobs contemplated selling it, with Microsoft being one of the potential buyers. Lasseter pitched an idea to the Walt Disney Studios about Pixar creating a 30 minute holiday special based on the award winning short Tin Toy; Disney thought that the short had a potential of being a full-length feature film, and gave Pixar the chance of reaching their dream. The film, Toy Story, became a spectacular success, grossing over $360 million at the box office. Since then, Pixar founded their studio in Emeryville, California, in 2000, and in 2006, was purchased by Disney. Pixar has had an unprecedented string of hits unlike any studio in history, with hit films including a bug’s life, Monsters, Inc., Finding Nemo, The Incredibles, Cars, Ratatouille, WALL-E, Up, and Brave.