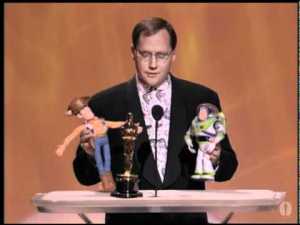 “Now we take you to the world of computer animation, where director John Lasseter has proved that a boy with a hard drive can go a long way.” – Presenter Robin Williams

On March 25, 1996, the 68th Academy Awards were held in the Dorothy Chandler Pavilion in Los Angeles, California. At this ceremony, John Lasseter was awarded a special Academy Award for the creation of the first fully computer-animated feature film, Toy Story, calling its creation a milestone in the achievement of motion pictures. The film had been a long time in the making, going back to Lasseter’s aspirations after starting at Disney decades earlier. Lasseter showed up on stage to receive the award, bringing with him a Woody and a Buzz Lightyear toy. Lasseter thanked the Academy for its longtime support of student filmmakers, as well as everyone at Pixar and Disney for their support and effort into making the film.