On June 20, 1953, the Goofy short film Father’s Week End was released to theaters. In this short, Goofy plays the everyday man “George Geef.” It was directed by Jack Kinney, with story by Dick Kinney and Brice Mack.

It’s morning, and George Geef is seen going through the pattern of his day, until Saturday, when he has a wild night before his day of rest on Sunday. As Geef sleeps, his son climbs into bed with him, disturbing his sleep. The day begins, with Geef trying to get his sleep while the whole house is awake and noisy. He heads outside to get his newspaper, running into the whole neighborhood. As he lounges with the paper, he quickly cleans for company, only to find that the perceived company is heading next door. After breakfast, he heads to the backyard to relax in the hammock, only to be sent to the beach with his son by his wife. Geef is distracted during the drive by his son and their dog, barely making it there. The day at the beach is continuously ruined by misfortune that causes Junior to cry, until Geef takes him to the carnival, where he promptly loses him. He chases after Junior through a fun house, catches him and tries to take him home, only to get caught in traffic. The next day, Geef is more than ready to get back to his monotonous week.

June 19, 1995 – The Partners Statue is Installed at Walt Disney World

“We believe in our idea: a family park where parents and children could have fun – together.”

On June 19, 1995, the Partners statue was installed at Walt Disney World, in the hub of the Magic Kingdom Park. The statue was originally installed in Disneyland to celebrate the 65th birthday of Mickey Mouse, and was created by Disney Legend Blaine Gibson, who had come out of retirement just for the project. The Walt Disney World statue is the second of five installations of the statue, with the others in Tokyo Disneyland, Walt Disney Studios Paris, and at the Disney Studios in Burbank. The

June 18, 1983 – The Flights of Fantasy Parade begins in Disneyland

On June 18, 1983, the Flights of Fantasy Parade debuted in Disneyland. The parade was a daytime and nighttime parade, and replaced the Main Street Electrical Parade during its run. The parade was created to help usher in the changes with the newly expanded Fantasyland area within the park, and featured several floats with inflatable characters from such Disney classics as Winnie the Pooh, Sleeping Beauty, and Fantasia. The parade finished its run in the park on September 10, 1983.

June 17, 2008 – The Soundtrack to Camp Rock is Released Through Walt Disney Records

“Raise your hands up in the air and scream, we’re finding our voice, following our dream.”

On June 17, 2008, the soundtrack to the Disney Channel Original Movie Camp Rock was released through Walt Disney Records. The soundtrack had been streamed a week earlier on the Camp Rock official site, and officially premiered on Radio Disney on the 14th. On its official release, the album peaked at 3 on the Billboard 200, as well as reaching 2 on the U.S. iTunes store. The soundtrack featured performances by the Jonas Brothers and Demi Lovato, the stars of the film.

“Just an ordinary day, all at once you’re on your way to a place that cannot be no one knows what turns the key.”

On June 16, 1984, the 3-D film attraction Magic Journeys opened in Disneyland, first premiering at the Space Stage outdoor area; the area was then replaced with the indoor Magic Eye Theater. The film, considered an impressionistic view of the world through a child’s imagination, first premiered in Walt Disney World on October 1, 1982, with Disneyland being the second park in which the film played. The film stopped showing in Disneyland in 1986, and was replaced by Captain EO.

On June 15, 1917, Bill Martin was born in Marshalltown, Iowa. He and his family would move to Los Angeles, and in 1937, he graduated from Los Angeles Junior College after studying architecture. He continued his studies at the Chouinard Art Institute and the Art Center School of Design before landing a job at 20th Century Fox as a set designer. Like many men of the time, Martin left Hollywood to serve during World War II, servicing as a captain in the Air Force. He returned after the war to work at Panoramic Productions before rejoining Fox as an assistant art director. In 1953, Martin received a phone call from the Disney Studios, as Walt was looking for the best to help him create what would become Disneyland. He eagerly joined WED Enterprises, and would go on to develop the designs for some of the most beloved attractions, including Peter Pan’s Flight and Sleeping Beauty Castle. Eventually, Martin would be named the art director of Fantasyland, and not only developed many of the layouts of each Fantasyland attraction, but added design elements to other attractions across the park. In 1971, he was named the vice president of design at WED, and contributed his design expertise to the layout of the Magic Kingdom in Walt Disney World. He retired in 1977, after 24 years with the company; like many others, however, Martin continued to consult on many projects for various parks. He was inducted as a Disney Legend in 1994. In 2010, Martin passed away.

June 14, 2011 – The Soundtrack for Cars 2 is Released Through Walt Disney Records

“You might think I’m crazy to hang around with you.”

On June 14, 2011, the soundtrack to Pixar’s 12th animated feature Cars 2 was released through Walt Disney Records. The soundtrack featured a score by Michael Giacchino, who had previously worked on The Incredibles, Ratatouille, and Up; this was his first collaboration with John Lasseter as the director. The soundtrack also featured songs by artists Weezer, Brad Paisley, Robbie Williams, and Japanese pop group Perfume. The soundtrack peaked at number 7 on the Billboard Top Soundtracks chart.

June 13, 1960 – Hayley Mills Appears as Pollyanna on the Cover of Life Magazine 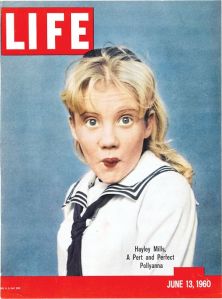 “A pert and perfect Pollyanna.”

On June 13, 1960, actress and Disney Legend Hayley Mills was featured on the cover of Life Magazine as the titular film character Pollyanna. The film was a success with film critics since its release in May, with the article focusing on young Mills, who would go on to win the Academy Juvenile Award for the role.

On June 12, 1999, Disney’s 37th animated feature Tarzan premiered at the El Capitan Theatre, one week before its general United States release. The theatre had just undergone some drastic renovations, including the new Wurlitzer organ. The presentation of the film included a 20-minute live show, as well as a performance by singer/songwriter Phil Collins. Celebrities at the event included Tony Goldwyn, Minnie Driver, and Brian Blessed.

“You’re in for a whirlwind of fun as you swing above Paradise Bay to the dramatic score of ‘The William Tell Overture.'”

On June 11, 2010, the Silly Symphony Swings attraction opened in the Disney’s California Adventure Park. The attraction, known as a “wave swinger,” is themed after the Mickey Mouse short film The Band Concert, particularly the scene where the orchestra is tossed about by a whirlwind. The attraction replaced the Orange Stinger, another type of wave swinger attraction that had several problems during its operation.