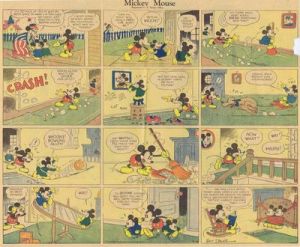 On September 18, 1932, the twin characters Ferdy and Morty, Mickey’s nephews, officially premiered in the Mickey Mouse comic strip (although in this first appearance, Ferdy was spelled “Ferdie;” the spelling was subsequently changed). They first appeared in the comic Mickey’s Nephews, where the twins are left with Mickey and cause havoc for their poor uncle, until he ties them to the bed and reads them a bedtime story, which he has been told calms them down. The characters only made one appearance in an animated short film: the 1934 short film Mickey’s Steam Roller. 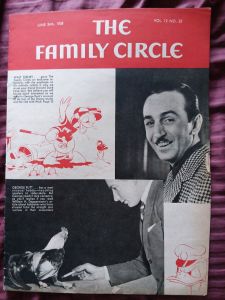 “Walt Disney talks, mostly of his animals, and the author learns new facts about them.”

On June 24, 1938, Walt Disney graced the cover of The Family Circle magazine. Following the success of Snow White and the Seven Dwarfs, Walt is interviewed about the success of the film and the characters he’s created, ranging from Mickey Mouse to characters from the successful Silly Symphonies series of short films. The cover of the magazine featured a smiling Walt surrounded by images of Donald Duck. 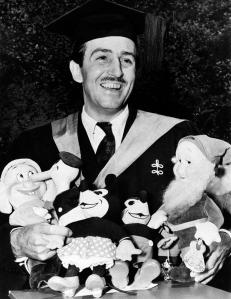 “I am greatly honored to know that the Governing Board of Harvard University have voted to confer upon me the honorary degree of Master of Fine Arts on Commencement Day, June 23rd.”

On June 23, 1938, Walt Disney received an honorary degree from Harvard University, his third honorary degree of the year. With the success of the character Mickey Mouse, as well as the animated feature film Snow White and the Seven Dwarfs, Disney was honored for, as Harvard’s then-president James Bryant Conant stated, “…[creating] a modern dwelling for the Muses; his hand controls a multitude of elfish animals who charm all humans by their mirth.”

February 27, 1935 – The Tortoise and the Hare Wins Academy Award 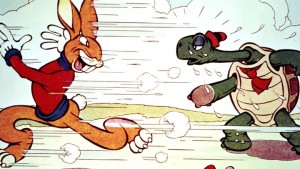 On February 27, 1935, the 7th Academy Awards were held at the Biltmore Hotel in Los Angeles, California. The short film The Tortoise and the Hare won the Academy Award for Best Short Subject, Cartoon, beating out Holiday Land by Screen Gems and Jolly Little Elves by Walter Lantz. This was Disney’s third win in the category since its founding in 1934; Disney would dominate this category until 1940. 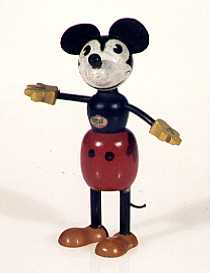 On February 3, 1930, Roy Disney signed The Walt Disney Company’s first merchandising contract of what was to become a multi-million dollar merchandising empire. The contract was with the George Borgfeldt Company of New York, giving them the right to create figurines and toys of Mickey and Minnie Mouse; the first license that the Borgfeldt Company made was with a Swiss firm that created handkerchiefs with the characters’ likenesses. The returns on the products were not great for Disney, as they only received a 2.5% royalty on items that were 50cents or less (about $8.00 today), and 5% royalty on more expensive items. 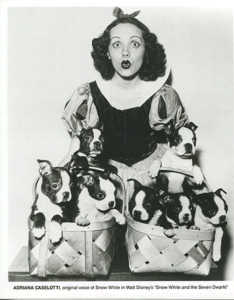 “Adriana happened to pick up an extension and, while listening to her father’s conversation, chimed in, ‘Listen to me – wouldn’t my voice do?’ Indeed it did, and, over the next year, her voice was tested, songs were recorded, and the Disney animators studied her gestures for inspiration.”

On January 20, 1936, 18-year-old Adriana Caselotti recorded her first tracks as the title character in what would become the animated feature film Snow White and the Seven Dwarfs. Caselotti was chosen out of over 150 girls that auditioned for the part, as Walt Disney believed she sounded like a fourteen-year-old girl, which is exactly what he needed. Caselotti was paid $20 a day to play Snow White, earning $970 for her time overall, equivalent to almost $17,000 today. 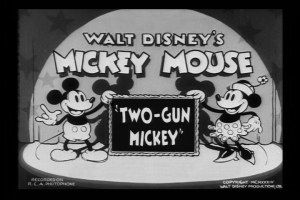 “On your way, cowboy. I can take care of myself.”

On December 15, 1934, the Mickey Mouse short film Two-Gun Mickey was released to theaters. It was the first short film to be directed by Ben Sharpsteen.

The short begins with Minnie riding a trail, with her horses stopping at a puddle and refusing to cross through it. As she tries to pull them forward, she lands in the puddle, much to the laughter of Mickey, who has been watching nearby. Minnie refuses his help, though he assists her anyway without so much as a thank you. Minnie continues into town, and rebuffs the advances of Pete, who is a wanted bank robber. He and his gang chase after her, and Minnie races through the desert to get away. Meanwhile, Mickey is dreaming of Minnie at his campfire, when he hears her scream nearby. Seeing that she is being chased by bandits, he and his horse race down the canyon to rescue her. Pete manages to trap Minnie up a pole, and catches her in his arms, teasing her about her thinking she can take care of herself. As the gang fires on Mickey, he is able to shoot back with gusto, defeating all of the bandits with a series of well-placed shots. He then finally finds Minnie, and fights with Pete, eventually ending up falling off the side of a cliff. Mickey and Minnie share a kiss as they ride off into the sunset, pulling an unconscious Pete behind them.