“You will be invited to ride in [Lord Henry Mystic’s] latest invention the ‘Mystic Magneto-Electric Carriage,’ and treated to a front row experience of the precious collection!”

On May 17, 2013, the third and final land of Hong Kong Disneyland’s land expansion project, Mystic Point, opened to the public. The area includes Mystic Manor, a Haunted Mansion-style attraction; Garden of Wonders, a garden area filled with 3D illusionary sculptures; and Mystic Point Freight Depot, where guests can take pictures with recreations of famous antiquities from around the world. The Explorer’s Club Restaurant gives guests a chance to dine on Korean, Japanese, and South East Asian delicacies, while being surrounded by décor from Egypt, Russia, Morocco, India, and China. Guests can also buy very special souvenirs at the Archive Shop, including an explorer’s hat with Mickey Mouse ears. 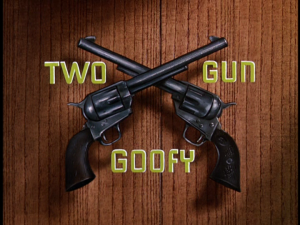 “Oh, I’m a-ropin’ and a-ridin’ and a-shootin’ fool, oh I’m as tough and ornery, meaner than a rawhide mule, oh I’m as quick as greasy lightnin’ when I go for my gun. Reach, you mangy buzzards, reach for the sun!”

On May 16, 1952, the Goofy short film Two-Gun Goofy was released to theaters. It was directed by Jack Kinney, with story by Brice Mack and Dan MacManus.

In the old west, the townsfolk are terrorized by Pistol Pete, who rides in and quickly robs the bank before shooting up the town. Meanwhile, Goofy rides through the desert, when he encounters a wanted poster for Pete, with a reward of $10,000, dead or alive. Goofy talks to the poster, claiming he’d get the jump on Pete if he were real. Soon, he encounters Pete robbing a coach, and stops Pete without even realizing it. The members of the coach spread the news of Goofy’s heroic dead, and as Pete races for the town, the folks count on Goofy to win against the villain. Once again, Goofy is able to knock Pete down without being fully aware, but when he realizes that the real Pete is right in front of him, he tries to hide. Mesmerized once again by the woman from the coach, Goofy’s attention is fixed solely on her, and Pete’s attempts to thwart him go unnoticed by the lovesick cowboy. The undertaker gives Pete a large stick of dynamite to destroy Goofy, and Pete sticks it in Goofy’s pants. As Pete tries to get away from the dynamite, he realizes that the only safe place is the jail, where he locks himself in and throws away the key. Goofy is then named the new sheriff of the town, and the short ends when Goofy receives a rather “explosive” kiss from his dream girl from the coach.

May 15, 1930 – The Mickey Mouse Short Film The Cactus Kid is Released to Theaters

On May 15, 1930, the Mickey Mouse short film The Cactus Kid was released to theaters. This short features Pete once again as the villain, only this time he is named “Pedro.” It was directed by Walt Disney.

Mickey is riding around the desert, with Horace Horsecollar as his trusty steed, when they arrive at the El Adobo Café, where Minnie is a beautiful bartender. Mickey starts playing a melody on glasses to impress her, although he goes a bit too far when he pulls her nose. She starts yelling at him in Spanish and hits him over the head with a lamp before throwing bottles at him. As two mugs are thrown at him, he grabs them and starts dancing again, tapping the mugs together rhythmically. He then sits at the piano and starts playing a piece. Pedro arrives at the door of the café, and starts dancing, although he unfortunately gets his peg leg stuck in a hole in the floor. When he attempts to woo Minnie, Mickey steps in to protect her. Pedro corners Mickey against the wall, but Mickey is able to take his gun and turn it back on him. Pedro is able to turn off the lights, and steals Minnie in the darkness. Mickey attempts to ride Horace, but the saddle and Mickey slip off. Although Mickey ropes Horace, he trails behind, hitting every cactus in the desert. Mickey finally is able to catch up to Pedro and beat him up, and Pedro falls from a cliff, getting hit by a heavy rock at the bottom. Mickey and Minnie watch as Pedro stands and walks away, attened like an accordion.

“Today, [Mickey Mouse] will be the one of the key phrases at an auction of Disneyana – relics of the early days of the Walt Disney empire built on the 1928 cartoon which gave birth to the legendary mouse.” – Kearney Bothwell, The Bridgeport Post

On May 14, 1972, the first auction of Disney memorabilia, known as “Disneyana,” was held by Sotheby’s in Los Angeles, California. Disney memorabilia had been around since the late 1920s, when merchandise featuring Mickey Mouse was sold, ranging from plush toys to watches. The term itself came into prominence with the 1974 book Disneyana: Walt Disney Collectables by Cecil Munsey. The auction contained nearly 200 items, although some items were other cartoon memorabilia pieces. The Disney pieces range from a Mickey and Minnie alarm clock, a watering can, watches, cels from Snow White and the Seven Dwarfs and Bambi signed by Walt Disney, and figurines. The pieces were from the collections of New York businessman Robert Lesser, and Kay Kamen, who helped created the whole licensing industry through his work with Disney.

May 13, 2006 – The Special Short Film The Little Matchgirl is Shown at the Eugene Film Festival

On May 13, 2006, the special short film The Little Matchgirl was screened at the Eugene Film Festival in Eugene, Oregon. It was then followed with a run in Los Angeles starting August 23 to qualify for an Academy Award, and then was released on the Platinum Edition of The Little Mermaid. The short has no dialogue, but features Alexander Borodin’s “String Quartet No. 2 in D Major.” The story was also changed to be set in Russia, rather than its original Denmark. It was directed and adapted by Roger Allers, and based on the story by writer Hans Christian Andersen. It was nominated for an Academy Award, but lost to Torill Kove’s The Danish Poet.

The short opens on a snowy day in Russia, and a little girl watches happily as people ice skate on the river. She is knocked over by a horse as she starts to walk away, and quickly gathers the matches that have fallen to the ground. The girl wears no shoes, only some fabric wrapped around her feet, leaving her toes bare. The girl walks around the marketplace, trying to sell her matches, but is ignored by the villagers. She watches as a family steps out of a store with presents for Christmas, and they ride off together in a sleigh. As the lamps are lit for the night, and everyone heads home, the girl walks to a small nook, where she tries to keep warm. Seeing her unsold matches, she is tempted to use one to stay warm, but resists. In the end, she lights a match, and sees a vision of a stove. After her match goes out, she lights another one, and sees the vision of a Christmas feast, complete with turkey. With four matches remaining, she lights another one, and this time sees herself in a horse-drawn sleigh, gliding across the snow covered plains to a warm and inviting house, where her grandmother lives. Wanting to see her grandmother again, she lights the remaining matches, and runs into her arms. She then sees a giant Christmas tree with presents all around. The next morning, the little girl’s soul is taken to Heaven by her grandmother, with her body remaining in the small crevice, the burnt out matches surrounding her. A shooting star travels across the sky, a symbol for a soul taken to Heaven.

May 12, 1993 – Walt Disney is Posthumously Inducted into the Hall of Famous Missourians

“Walter Elias Disney was a film and animation pioneer and innovator whose achievements sparked the imagination of people throughout the world.”

On May 12, 1993, Walt Disney was posthumously inducted into the Hall of Famous Missourians, located in the Missouri House of Representative. This award honors those from the state of Missouri who have made an impact on the world. Although born in Chicago, Illinois, Disney always considered Missouri, his home; Marceline was where Disney discovered his loves of drawing and trains, and Kansas City’s Electric Park was an inspiration for the look of Disneyland. Disney joins the likes of Scott Joplin, Harry Truman, and Laura Ingalls Wilder. Disney is honored by a bronze bust, sculpted by William J. Williams.

May 11, 2013 – Merida is Crowned as the Eleventh Disney Princess 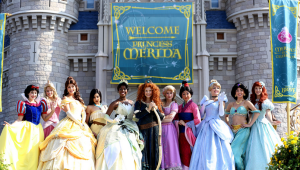 On May 11, 2013, the character Merida from the Pixar film Brave was crowned as Disney’s eleventh official princess. The event took place at Cinderella Castle in the Magic Kingdom of Walt Disney World, which featured special guests Olympic Gold-Medal winner Gabby Douglas and her mother, as well as all ten princesses in the Disney lineup. Amidst hundreds of guests that were in attendance, Merida entered the Magic Kingdom on her horse Angus, accompanied by a traditional Scottish pipe and drum band, along with a troupe of Scottish dancers. Her mother, Queen Elinor, was on hand to crown her daughter in a touching ceremony that highlighted the bond between mother and daughter from the film.