“You know, a book be like a ship: it can take ye to places you’ve never seen before.”

On October 6, 1968, the episode of the Disney Anthology, entitled “Pacifically Peeking,” premiered on NBC. It was directed by Ward Kimball and Hamilton Luske, with story by Bill Berg, narration by Mel Leven, and featured Paul Frees as the voice of Moby Duck, the author of the titular book. Moby Duck takes viewers on a cruise of the Pacific Ocean, with the episode bringing together animation and education.

“I am the lucky one who gets to come up and pick up this golden girl, but Estelle, and Rue, and Bea, and I all thank you. We’re a matched set; you can’t split us up.”

On September 21, 1986, the 38th Primetime Emmy Awards were held at the Pasadena Civic Auditorium in Pasadena, California. There, out of nine nominations (many for the same category), the NBC comedy series The Golden Girls walked away with 3 Primetime Emmys, including Outstanding Writing in a Comedy Series (for the episode “A Little Romance”), Outstanding Lead Actress in a Comedy Series for actress Betty White (who appeared in the series as Rose Nylund), and Outstanding Comedy Series. The series won the final award against such series as Cheers, The Cosby Show, Family Ties, and Kate & Allie.

December 30, 1990 – The Final Episode of Hull High Premieres on NBC

On December 30, 1990, the final episode of the short-lived musical drama series Hull High premiered on NBC. Created by Gil Grant, the series centered around a group of students and teachers at a Southern California high school that featured musical numbers and a Greek chorus element. The musical numbers were choreographed by Peggy Holmes and Kenny Ortega; the latter is well-known for his work on the popular High School Musical series. The series starred Will Lyman as John Deerborn, Nancy Valen as Donna Breedlove, George Martin as Mr. Dobosh, Harold Pruett as Cody Rome, Mark Ballou as Mark, Marty Belafsky as Louis Plumb, Marshall Bell as Jim Fancher, Kristin Dattilo as DJ, and Cheryl Pollack as Camilla. The series only aired eight episodes, as it proved to be uninteresting to viewers.

“For the kitten, though, this tangle of trouble was just the beginning. He was on his own now, heading for big adventure, and he hadn’t even left the den yet.”

On December 11, 1966, the episode of Walt Disney’s Wonderful World of Color, entitled “Joker, the Amiable Ocelot,” premiered on NBC. It stars Winston Hibler as the narrator, and featured Robert Becker as Jim Benton, a tow truck driver who finds an ocelot in the back of a car left abandoned in the desert. Jim is a loner and a drifter who never learned how to handle the limp with which he was born. A whole family of ocelots was in the car, but evacuated when Jim found the car, save for one kitten who got stuck. Jim took the abandoned car to his remote shop, and the ocelot kitten hops out of the car and starts looking for his mother. He manages to find Jim’s cat Duchess and takes to her quickly. Jim has several unusual pets, and is kind and caring to all of them, nursing several of them back to health. When Jim realized that one of Duchess’ kittens was not like the others, he nicknamed the ocelot Joker and took care of it. Joker gets the attention of a nurse named Nancy Conroy that stopped by for gasoline (played by Jan McNabb), and she starts a conversation with Jim, trying to be friendly. Jim bonds with Joker, and the two become best friends, but after a while, he realizes that Joker needs to return to the wild. While they have a sad parting, a happy ending is found for both, as Joker finds a mate, and Jim gets close to Nancy.

“Now, join a galaxy of stars and celebrities as they gather in Disneyland for Disney’s Captain EO Grand Opening!”

The special opens with a parade down Main Street before switching to the commentary by Bateman and Duffy, introducing many celebrities that were in attendance for the world premiere of Captain EO, including producer of the film George Lucas. The show then switches to a behind-the-scenes look of the film, along with an introduction of the characters in the film, including the villain played by Academy Award winning actress Anjelica Huston. The show also shows the complex choreography needed for the film, as it was a musical adventure experience.

On May 6, 1990, the television special The Muppets at Walt Disney World premiered on NBC under the “Magical World of Disney” programming banner. The special featured the classic Jim Henson-created characters exploring the Florida theme park, and was the last Muppet feature that Henson would work on before his untimely passing. It was created to help highlight the merger between The Walt Disney Company and the Jim Henson Company, a merger that wouldn’t fully take place until 2004. The episode also starred Charles Grodin, Raven-Symoné, and Michael Eisner.

October 9, 1988 – The Magical World of Disney Premieres on NBC

“Welcome to the Magical World of Disney.”

On October 9, 1988, the newest iteration of the Disney anthology series, The Magical World of Disney, premiered on NBC. This was the third title of the second era of the series, and ninth overall. NBC had dropped the anthology in 1981, but had renewed interest in the broadcast in 1988 after significant changes within the Disney Company; CEO Michael Eisner continued to present the broadcast after starting hosting duties in 1986 with The Disney Sunday Movie. Unfortunately, the series ran into ratings problems during its run, and ended its run on September 9, 1990. The program block was moved back to the Disney Channel on September 23, 1990.

January 8, 2002 – The Live-Action Comedy Series Imagine That Premieres on NBC

On January 8, 2002, the live-action comedy series Imagine That premiered on NBC, with production by Columbia TriStar Television, Seth Kurland Productions, and Touchstone Television. The plot comprised of comedy sketch writer Josh Miller’s life, intertwined with a rich imagination. The series was cancelled only after two episodes. It was created by Seth Kurland, and starred Hank Azaria as Josh Miller, Jayne Brook as Wendy Miller, Joshua Malina as Kenny Fleck, and Katey Sagal as Barb Thompson. 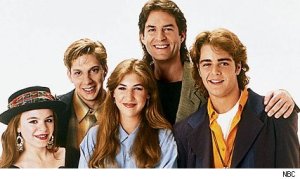 “Are you referring to the onset of puberty? A feeling of ennui, a kind of overall…bloat?”

On January 3, 1991, the sitcom Blossom premiered on NBC. Produced by Impact Zone Productions in association with Witt/Thomas Productions and Touchstone Television (the latter of which would become ABC Studios in 2007), it was distributed by Disney-ABC Domestic Television and ran for 5 seasons with 114 episodes. The pilot was released on July 5, 1990, as a television special; NBC, pleased with the ratings, ordered a full season of the show as a midseason replacement in January. The show centers around teenager Blossom Russo who, like the rest of her family, has to adjust to her parents’ divorce. Blossom’s family consists of her father Nick, a piano player; older brother Tony, a recovering alcoholic and drug addict; and older brother Joey, a stereotypical “dumb jock.” Blossom also has a best friend named Six Lemeure, who is considered part of the family. The series was created by Don Reo, and stars Mayim Bialik as Blossom, Ted Wass as Nick, Michael Stoyanov as Tony, Joey Lawrence as Joey, and Jenna von Oÿ as Six.

The first episode to premiere, “Blossom Blossoms,” begins with Blossom shopping for her first box of tampons at the grocery store, but is rather embarrassed as her crush Mitchell works at the store, and ends up too ashamed to buy them. She relays the story to her friend Six, and then admits her wish that her mother would live with her sometimes to help her through the things she’s going through. Six reassures her that everything will be okay, and gives Blossom the option of talking to her own mother. After Six leaves, Blossom goes to her kitchen and discovers her brothers working on a film for school, but is annoyed at their antics. Later that evening, she goes to the kitchen again and talks to her father, who is concerned that she’s awake at a late hour. However, she doesn’t feel like she can talk to her father about all that she’s going through, and leaves the conversation, pretending that everything worked itself out.

In a fantasy, Blossom heads to the kitchen again and is greeted by her “mother,” Phylicia Rashād. Her “mother” starts explaining the facts of life by using icing to draw on a cake. Blossom wakes up from her dream and is saddened that her mother really isn’t there, so she decides to try and call her mom, who is actually in Paris. Her mom isn’t there, and she attempts to leave a message, but finds she can’t do so. Later in the week, Nick asks his sons if they’ve noticed anything unusual about Blossom. They tell him that she seemed strange the other day, but don’t believe that there’s anything wrong. Blossom heads over to her neighbor Agnes’s house to deliver her groceries, and starts to let out her feelings that she feels abandoned by her mother. Agnes comforts her, and convinces her to talk to her father again, telling her she should work with what she’s got. Blossom gets home and gently tries to allude to Nick what’s going on. Nick goes through a range of emotions, but in the end embarrasses Blossom by announcing to her brothers that Blossom has gotten her period. Later, the family is preparing to go out for a “celebratory dinner,” which Blossom finds incredibly weird. As Nick helps her with her hair, Blossom asks if her mother will ever come home. Nick tells her that this isn’t her home anymore, but it’s okay for Blossom to miss her, but promises that he’ll be there to answer any questions she has.