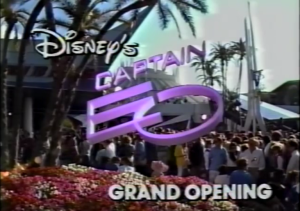 “Now, join a galaxy of stars and celebrities as they gather in Disneyland for Disney’s Captain EO Grand Opening!”

The special opens with a parade down Main Street before switching to the commentary by Bateman and Duffy, introducing many celebrities that were in attendance for the world premiere of Captain EO, including producer of the film George Lucas. The show then switches to a behind-the-scenes look of the film, along with an introduction of the characters in the film, including the villain played by Academy Award winning actress Anjelica Huston. The show also shows the complex choreography needed for the film, as it was a musical adventure experience.