“Enter a world of imagination and vision inspired by Disney films, characters, icons, and – of course – the mouse who started it all.”

“Her work was and continues to be a major source of inspiration for a large number of artists working in animation, illustration, and fine art…and the Google Doodle team.” – Artist Mike Dutton

On October 21, 2011, search engine Google celebrated the work and life of artist and Disney Legend Mary Blair on what would have been her 100th birthday. Blair, known for her colorful, whimsical illustrations, artist Mike Dutton chose to honor her in her own style rather than painting her more representationally. Blair’s reach extended outside of her Disney projects, though she is arguably most known for her stylized look of the popular attraction it’s a small world. 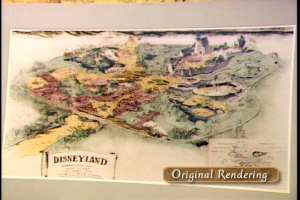 On September 26, 1953, Walt Disney called Herb Ryman to come to the Disney Studios as soon as possible. Ryman had worked for the studios in the 1940s, even as part of the South America goodwill trip, but had left to work at another studio while pursuing a career as an artist. Ryman came to the office and was told about Walt’s idea for an amusement park known as Disneyland. When Ryman voiced that he’d like to see it, Walt responded “You’re going to [draw] it.” Ryman had balked at this, especially being given the weekend to do it, as Roy was to talk to the bankers on Monday. Walt offered to stay with Ryman, and the two worked over 42 hours to create the initial rendering of what would become the Happiest Place on Earth.

On July 23, 1911, Albert Taylor Dempster was born in Atlantic City, New Jersey. In 1939, after studying at the Art Center School in Los Angeles, he joined the Disney Studios as a layout trainee. After joining the background department, Dempster made significant contributions to the backgrounds of several animated feature films, including Fantasia, Make Mine Music, and Victory Through Air Power. He left the studios in 1945, but returned in 1952 to work on more animated features. What Dempster is most known for, however, is his work on the Disney Golden Books. Having loved to illustrate books, Dempster contributed his talents to reinterpreting the familiar Disney stories through new innovative and whimsical art. His most beloved piece was the book for Alice in Wonderland, which is widely regarded as a masterpiece in the Little Golden Books collection. In 1973, Dempster retired from the Disney Studios, and passed away in the Los Osos home at the age of 89 in 2001. In 2006, he was honored as a Disney Legend for his artistic credits.

“When I think of dreams, like as a kid, I see Mary Blair-like colors…like Cinderella herself, just this innocence and a purity, a sincerity…” – Animator Glen Keane

On October 21, 1911, Mary Robinson Blair was born in McAlester, Oklahoma, with her family moving to San Jose, California when she was seven. Blair’s talents were noticed early, and she was awarded a scholarship to the Chouinard Art Institute in Los Angeles. There, she would meet her husband, Lee Blair. She and Lee began to look for work as artists during the height of the Depression, and eventually found work at Metro-Goldwyn-Mayer’s animation studio. Lee eventually found a job at the Disney Studios, and Mary joined him in 1940, with everyone fascinated with Mary’s use of color in her work. Her first pieces of work were preliminary sketches for the feature film Dumbo.

In 1941, Blair and her husband were selected to be a part of a goodwill tour of South America with Walt Disney and his wife, which included several other notable Disney employees, including Frank Thomas (animator), Herb Ryman (layout and camera), Norm Ferguson (producer), and Bill Cottrell (story). The group would do research for a series of feature films that would hopefully offer friendship to South America before they were taken over by Nazi and Fascist influence. Blair’s work during this trip helped to shape her artistic style, and she was named the art supervisor for Saludos Amigos! and The Three Caballeros. One short that clearly shows Blair’s style was The Little House, released in 1952 [see August 8th entry]. The tone of pivotal scenes in the feature films she worked on were conveyed through her use of color in her concept art. Animator Andreas Deja recalled, “Marc Davis once said, ‘Mary Blair could put colors together like nobody else. She was better than Matisse.’” 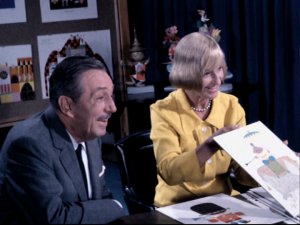 Walt was always captivated by Blair’s concept art and use of color, and asked her to come back to help create the look of the attraction It’s a Small World

Blair’s color use would be used to style such films as Song of the South, Make Mine Music, Melody Time, So Dear to My Heart, The Adventures of Ichabod and Mr. Toad, Cinderella, Alice in Wonderland, and Peter Pan. She left the studio in 1953, just after Peter Pan, to try other fields of animation, including children’s book illustrations. However, in 1963, Walt Disney asked her to come back to help design the look of a new attraction that would premiere at the 1964 World’s Fair: It’s a Small World. She was also asked to contribute to the design of other exhibits and attractions, including two grand murals, one for Tomorrowland in Disneyland, and one for the Contemporary Resort at Walt Disney World. Blair passed away on July 26, 1978, and was inducted as a Disney Legend in 1991.

May 24, 1913 – Birth of Disney Legend and Matte Painter Peter Ellenshaw

“[Ellenshaw’s] a pretty unique man. He had a sense of style and fantasy to his paintings that was extraordinary. If you were to look at a Peter Ellenshaw painting from Mary Poppins, it has an impressionistic quality to it.”

Peter Ellenshaw, best known as the matte painter on Mary Poppins, was born in London in 1913 and raised in Essex. His father died in World War I, and Ellenshaw left school at the age of 14 to support his family, but he kept up his passion for drawing. After meeting and being offered a job by matte painter Walter Percy Day, Ellenshaw worked as a painter on such films as The Thief of Baghdad, The Red Shoes, and Spartacus.

When Walt Disney set to work on making live-action films in England, he personally chose Ellenshaw to create the scenes of England during the days of Treasure Island. Disney then brought Ellenshaw to work on the production of 20,000 Leagues Under the Sea, which led to his best-known work of the background paintings in Mary Poppins, for which he won an Academy Award for Best Visual Effects.

Ellenshaw continued to contribute to Disney films as a matte artist, including Pollyanna and Swiss Family Robinson; in addition to his matte art, Ellenshaw contributed to the photographic effects on Darby O’Gill and the Little People, worked as a production designer on Island at the Top of the World and The Black Hole, and was the art director of Bedknobs and Broomsticks. Ellenshaw retired after his work on The Black Hole in 1979; however, he contributed to the matte paintings in the 1990 film Dick Tracy. He was named a Disney Legend in 2003, and passed away in 2007.

“His energy, curiosity and drive to create new experiences for our Disney park guests made him a leader and a teacher for all of us. He was a genuine one-of-a-kind.” – Marty Sklar, Walt Disney Imagineering President.

Claude Coats had a prolific career at the Walt Disney Studios: He began with creating the fantastical watercolor backgrounds in Pinocchio, and eventually became one of the lead developers of Walt Disney World attractions, including several World Showcase Pavilions at EPCOT Center. One of the few employees to receive a 50-year service award, Coats retired in 1984 after 54 years with Disney.

Born January 17, 1913, in San Francisco, Coats was raised in Los Angeles, and attended the University of Southern California, graduating with a Bachelor Degree in Fine Arts in 1934. He attended the Chouinard Art Institute, studying watercolor painting and becoming an active member of the California Water Color Society. Through the society, he was hired by Disney as an apprentice background painter in June 1935. Coats worked on backgrounds and color stylings of such films as Snow White and the Seven Dwarfs, Fantasia, Dumbo, Saludos Amigos, Make Mine Music, Lady and the Tramp, Cinderella, and Peter Pan. His watercolor background work on Pinocchio, however, continues to be lauded by animation critics and art collectors alike. Coats took the paintings of the village and Geppetto’s workshop by artist Gustaf Tenggren, and turned them into backgrounds “with the most appetizing appeal,” said animation historian, John Culhane. Coats’ eye for color was also used on several acclaimed short films, including The Old Mill and Ferdinand the Bull, both Academy Award winners.

Coats took on a new role in1955, when he became one of the elite artists brought in to work with WED Enterprises (now known as Walt Disney Imagineering). As part of the development team for several attractions, beginning with Mr. Toad’s Wild Ride, Coats helped bring Disney’s vision for Disneyland into being. He worked on several popular attractions, including The Haunted Mansion, Pirates of the Caribbean, Snow White’s Scary Adventures, and Submarine Voyage. Coats and Imagineer Herb Ryman were tasked with the darker rides in Fantasyland, including Peter Pan’s Flight. Coats also used his skills while working on the The 1964 New York World’s Fair attractions, including The Carousel of Progress and It’s a Small World.

Coats appeared in the Disneyland 10th Anniversary Episode on Walt Disney’s Wonderful World of Color (see the January 3rd entry), introduced by Walt as “the Imagineer in charge of the pirate project.” He explains staging a scene in the Pirates of the Caribbean attraction, where one character is being forced to walk the plank, to Walt and Julie Reihm during the episode.

Coats went on to design attractions for Walt Disney World, including The Mickey Mouse Review, Universe of Energy, and several World Showcase pavilions. He also worked on the international parks, including the Cinderella Castle Mystery Tour for Tokyo Disneyland. After 54 years of work for the Disney Company, Coats retired in November 1984, and was inducted as a Disney Legend at the October 22, 1991 ceremony. He passed away in Burbank, California, on January 9, 1992.