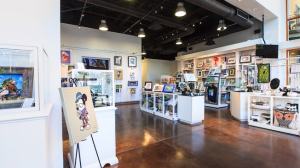 “Enter a world of imagination and vision inspired by Disney films, characters, icons, and – of course – the mouse who started it all.”