On December 29, 1974, it is widely believed that John Lennon, who was staying on vacation at Walt Disney World’s Polynesian Resort, signed the paperwork that effectively dissolved the partnership of the band the Beatles. Although the rest of the band had signed the papers at Apple Headquarters, Lennon had been a no-show at the meeting, and instead had gone to celebrate Christmas at Walt Disney World with his secretary and lover May Pang.

August 16, 2005 – Into the Rush, the Debut Album by Aly & AJ, is Released Through Hollywood Records

“Don’t let nobody tell you your life is over, be every color that you are.”

On August 16, 2005, the debut album of recording artists Aly & AJ, titled Into the Rush, was released through Hollywood Records. The album featured several promotional singles, including two cover songs: “Do You Believe in Magic” originally by The Lovin’ Spoonful and “Walking on Sunshine” originally by Katrina and the Waves. The album received favorable reviews, and debuted on the Billboard 200 at number 36. A deluxe version of the album was released almost a year later with two more singles: “Rush” and “Chemicals React.” Combined sales of the album and the deluxe album made the album the 112th bestselling album in 2006. 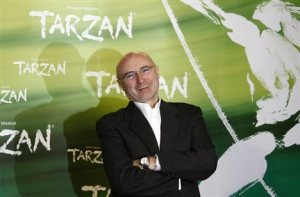 “[Collins’] voice has a tendency to wrap itself around you and bring you into his world. As soon as he starts singing, it’s just magic and provides a very welcoming feeling.” – Composer Mark Mancina

On January 30, 1951, Philip David Charles Collins was born in Hounslow, London, England. At age five, he was given a toy drum set, and was presented with complete sets by his parents and makeshift ones by his uncle as he got older. Collins was also a child actor, winning the role of the Artful Dodger in the West End production of Oliver! All the while, Collins continued to focus on his music, forming a band while in school and drumming for Flaming Youth and George Harrison. Collins found his big break in 1970, when he auditioned for and won the spot as the drummer for the band Genesis. After lead singer Peter Gabriel left the band in 1975, Collins became the lead vocalist of the group. The band had great success with Collins at the helm, including reaching Top 40 Chart in America. In 1981, Collins began a solo career, scoring a hit with his first single, “In the Air Tonight.” In 1985, he was nominated for his first Academy Award for the song “Against All Odds” from the film of the same name.

Collins’ first work for Disney came with the 1999 film Tarzan, where he wrote and performed the songs for the film. The song “You’ll Be in My Heart” reached number 1 on the Adult Contemporary charts and stayed at the top for 19 weeks; it was also awarded the Golden Globe for Best Original Song and the Academy Award for Best Original Song. Collins also performed the songs for the film in German, French, Spanish, Bulgarian, and Italian. “Strangers Like Me” from the soundtrack peaked at number 10 on the Adult Contemporary Charts. In 2002, he was awarded as a Disney Legend. Collins would go on to write and perform the songs for another Disney film, 2003’s Brother Bear. In 2006, when Tarzan was adapted for the Broadway stage, Collins contributed greatly to the production, writing 11 new songs and pieces of the score.