“Get special savings and exclusive offers when you join The Disney Club.”

On November 14, 2000, the Disney Club membership program officially launched. This club gave guests discounts on theme park tickets, merchandise, guided tours, and food and drink. This membership club replaced the long-running Magic Kingdom Club, which had been in operation since 1958. This incarnation of the club only lasted until December 31, 2003, when it was replaced by the Disney Visa Card. 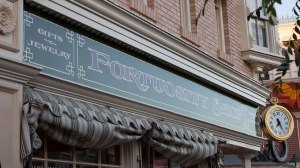 “While you can still find watches here, you can also find boutique-style clothing including fashionable scarves, purses and accessories, making it a must-visit for any Disney fashionista with an appreciation for style.”

On October 3, 2008, the Fortuosity Shop opened on Disneyland’s Main Street. The shop replaced the long-standing New Century Clock Shop, which opened in the park in 1972. It features a variety of fashionable pieces for sale, including scarves, purses, and watches. The shop is also redecorated for various seasons, and is well known for its Halloween decorations.

On April 3, 1983, the shopping gallery Yong Feng Shangdian opened in the China Pavilion of Epcot’s World Showcase. Similar to the department store Mitsukoshi in the Japan Pavilion, Yong Feng Shangdian offered many items from China, including scented oils, decorations, and specialty clothes. It was replaced in 2011 by the House of Good Fortune.

“Discover Val d’Europe where there are over 150 shops catering to your every need, giving you a shopping experience like no other!”

On October 25, 2000, the international shopping center Val d’Europe opened right next to Disneyland Paris. Leased to SEGECE, the factory outlet mall features stores ranging from the Apple Store to La Grand Récré. The shopping center also features the region’s largest aquarium, which is home to over 350 varieties of sea creature. The center is a mere five minute bus ride from Disneyland Paris park.

“Wear your love of Disney on your sleeve in a totally new way with retro and on-trend apparel and accessories.”

On October 11, 2006, the boutique store Disney Vault 28 opened in Disneyland’s Downtown Disney shopping district. The store offers Disney-inspired fashion for women, ranging from dresses to handbags. A grand opening celebration was held for the store on November 12, 2006. The store closed in September 2017 to make room for a new Star Wars-themed store.

May 23, 2015 – The Harambe Market Area Opens in Disney’s Animal Kingdom

May 23, 2015, the Harambe Market area opened in Disney’s Animal Kingdom Park in Walt Disney World. Nestled in the Africa area of the park, the market is designed to resemble a street market in Africa, complete with Colonial-era train depot design. The market contains not only a few shops to buy merchandise and sweets, but four separate food stations: Kitamu Grill, Famous Sausages, Chef Mwanga’s, and Wanjohi Refreshments. These four quick-service restaurants give guests the opportunity to enjoy something akin to street food, eating African-inspired dishes while they meander around the park.

On November 23, 1989, the specialty sweets shop Delizie Italiane opened in Epcot’s Italy Pavilion within the World Showcase. It features Italian favorites, such as world-famous Perugina chocolate bars and Baci chocolates with hazelnuts wrapped in love notes, along with other Italian chocolates and candies. The store is sponsored by Perugina, and took the place of Arcata d’Antigiani.

“Pamper your fairy tale fantasies during a most enchanting transformation – from young Guest to Disney Princess!”

On May 23, 2009, the Bibbidi Bobbidi Boutique made its way to Hong Kong Disneyland, opening in the Hong Kong Disneyland Hotel. This is the fourth version of the store to open in a Disney park, with the other three opening in Walt Disney World and Disneyland. When it first opened, it opened under the name My Little Princess before switching back to the well-known moniker. The packages offered include the Crown Package, with hair styling, crown, sash, make-up, manicure, and a photo, and the Castle Package, including many of the Crown Package features along with costume, wand, and ring set. 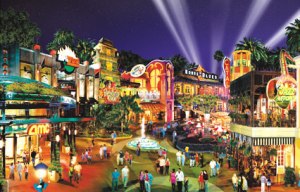 On January 12, 2001, the California version of the shopping district Downtown Disney opened in Disneyland. The area, situated between Disneyland and Disney’s California Adventure, features a variety of shops, entertainment, and dining options, ranging from a movie theater to fine dining table service restaurants. The district also features the largest Disney shopping experience in the parks: World of Disney; Marceline’s Confectionary is another favorite Disney shopping treat, where guests can purchase special Disney-themed treats, including the famous candy apples decorated for the season.