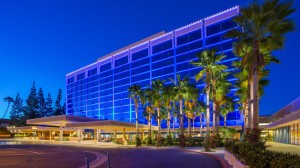 “Be surrounded in the spirit and wonder of Disneyland past and present.”

On October 5, 1955, the Disneyland Hotel opened across the street from the Disneyland Park. When the park was in development, Walt Disney wanted to build a hotel nearby, but didn’t have the funds to do so. Entrepreneur Jack Wrather, a friend of Walt’s, was convinced to build the first Disneyland Hotel, a simple motor inn with only 100 rooms. The hotel, owned under the Wrather Corporation, grew over the years, and after Walt’s death, the Disney Company decided that it was time that it owned the hotel. In 1988, after acquiring the Wrather Corporation, they not only gained complete control of the hotel, but the Queen Mary in Long Beach as well. The Disneyland Hotel is notable for its connection to the park by monorail, making it one of the most popular hotels on the Disneyland property. The hotel is also known for its selection of restaurants, the monorail-themed pool, and its three towers: Adventure, Fantasy, and Frontier. 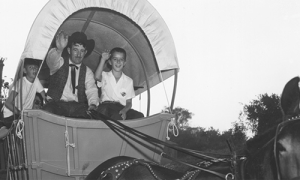 “It was the Conestoga, not the Covered Wagon, that developed the West.”

On August 16, 1955, the Conestoga Wagons attraction opened in Disneyland’s Frontierland. The attraction, keeping with the Western theme of the area, took guests around the Rivers of America on trails shared with stagecoaches. The wooden wagons were pulled by horses, and featured popular slogans of the era painted on the canvas tops. The attraction was closed in 1959.

“All aboard for a ‘mini’ tour of the fairytale homes and villages made famous in classic Disney animated movies.”

On July 31, 1955, the Fantasyland attraction Casey Jr. Circus Train opened in Disneyland. Based on the train from the animated feature film Dumbo, the attraction takes guests around the Storybook Land area, giving guests a splendid view of scenes from classic Disney animated features. The attraction, while supposed to be available on opening day of Disneyland, was delayed for two weeks due to mechanical problems. Several of the train cars were also taken from the original merry-go-round as it was refashioned as King Arthur Carousel. A version of the attraction was added to Disneyland Paris, known as Le Petit Train du Cirque.

“…many of the Disneyland ‘homemade’ candies have their own fanbase.”

On July 22, 1955, the Disneyland candy shop Candy Palace opened on Main Street. The store is home to several exclusive treats, particularly around Christmas, when the candy makers make their own candy canes. The main draw of the shop is the large front window that gives guests a look at the confectioners creating sweet treats the likes of caramel turtles, decorative gourmet caramel apples, and peanut brittle. Overall, about 63 different treats are made year-round in the candy kitchen. Walt Disney World has a similar store called the Main Street Confectionery; Disneyland Paris’ version is known as the Boardwalk Candy Palace. 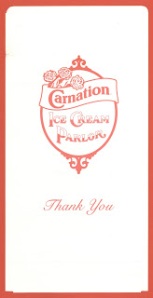 “Greetings from Carnation in Disneyland!”