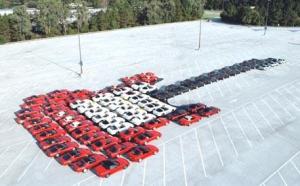 On July 29, 2000, to celebrate the one-year anniversary of the popular roller coaster Rock ‘n’ Roller Coaster, Disney created a guitar in the parking lot of Disney-MGM Studios Park out of 80 Corvettes, the signature car of the attraction. Using red, white, black, and silver cars, the formation resembled that of the Stratocaster, the guitar that covers the front of the attraction. 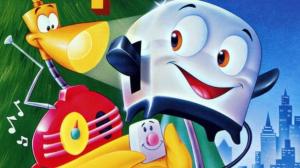 On October 17, 2017, to celebrate the 30th anniversary of the animated film The Brave Little Toaster, a special screening was held at the TCL Chinese Theatre. Upon purchasing a ticket, guests were also given a variety of gifts depending on ticket level, with every guest at least leaving with an original sketch and an animation cel. There was also a Q&A session with a variety of folks involved in the film, including the movie’s director, Jerry Rees, who help write the screenplay with Joe Ranft; Deanna Oliver, the voice of Toaster; composer and music arranger David Newman, and animator Kevin Lima. Producer Donald Kushner was also on hand to sell a variety of original artwork of the film from his personal collection.

May 10, 2007 – The Broadway Musical Tarzan Celebrates One Year on Broadway with Book Signing 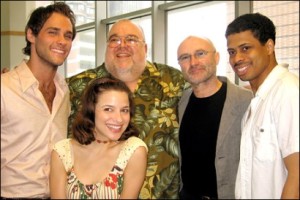 “Tarzan: The Broadway Adventure is an intimate backstage look at the five-year development process of Tarzan, from early concept drawings to auditions and exploratory flying workshops…”

On May 10, 2007, the Broadway musical Tarzan celebrated one year on Broadway with a special book signing at the Barnes & Noble Lincoln Triangle. Author Michael Lassell, who wrote Tarzan: The Broadway Adventure, was joined by actors Josh Strickland, Jenn Gambatese, and Chester Gregory, who played Tarzan, Jane, and Terk, respectively, along with composer Phil Collins. In addition to signing books, the cast members entertained the crowd with songs from the show. 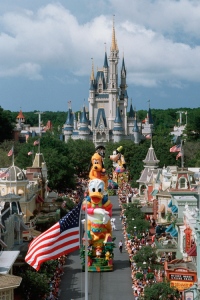 “One of 20 spectacular new reasons to visit this year!”

On September 22, 1991, the Surprise Celebration Parade began its run in Walt Disney World’s Magic Kingdom Park. Thrown to help celebrate the 20th anniversary of Walt Disney World, the parade featured 40-feet-tall character balloons that celebrated different festivals from around the world. The parade ran until June 4, 1994, and was followed by the Mickey Mania Parade. 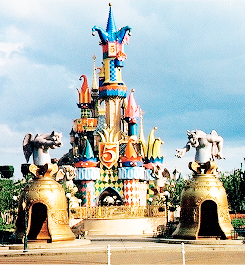 “Even Sleeping Beauty’s Castle went a little crazy as the Theme Park was decked out in all its finery to celebrate our 5th anniversary.”

On January 18, 1997, to celebrate the 5th anniversary of Disneyland Paris, Carnival Castle was unveiled. The castle, which is a temporary redesign of the Sleeping Beauty Castle, was styled not only to celebrate the park’s anniversary, but to promote the current Disney animated feature The Hunchback of Notre Dame, based on the book by French author Victor Hugo. The redesign gave the castle itself a variety of jester hats, while Central Plaza was decorated with gargoyles and renamed Gargoyle Square, and Main Street USA was covered in banners. 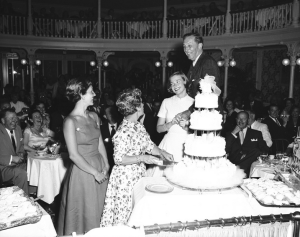 “Hope you can make it – we especially want you and, by the way, no gifts please – we have everything, including a grandson!”

On July 13, 1955, Walt and Lillian Disney celebrated their 30th wedding anniversary at the yet to be opened Disneyland Park, four days before the official opening. Three hundred guests (including the likes of Spencer Tracy and Cary Grant) gathered for a “Tempus Fugit Celebration,” beginning with a tour of Main Street led by Walt, and were ferried to the Golden Horseshoe for dinner on the Mark Twain paddlewheeler. Guests there then experienced the first, if unofficial, performance of the Golden Horseshoe Revue, followed by impromptu dancing. 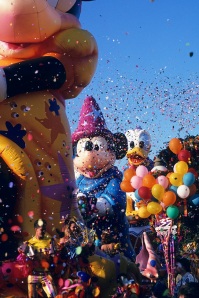 “Fun and excitement soar to new heights with the biggest, most spectacular parade we’ve ever dreamed up, Party Gras!”

On January 11, 1990, the Party Gras Parade began its run through Disneyland’s Magic Kingdom. It was a celebration of Disneyland’s 35th anniversary, and included floats of Mickey, Minnie, Goofy, Donald, Pluto, and Roger Rabbit with giant balloons of the characters. The parade lasted until November 18, 1990, and was also featured in the Sing Along Songs video Disneyland Fun. A version of this parade was created for the Tokyo Disneyland resort, running from 1991 to 1993; another version was created for the Walt Disney World 20th anniversary celebration, called the 20th Anniversary Surprise Celebration Parade. 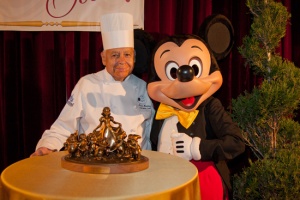 “Mix within one person one cup of integrity to ensure a strong foundation, one cup of sincerity to keep it from separating, and half of a cup of humor just for flavor, and just a pinch, a tiny pinch, of humility to keep it from burning. Pour all ingredients into the one good person, mix well, let it cook for 55 years, and that is how you get success.” – Matt Gray, Disneyland Park Food and Beverage General Manager

On December 29, 2011, Carnation Café cook celebrated his 55th anniversary working at Disneyland. Martinez began employment as a busboy, and has become a favorite of many guests through his tenure, as well as having trained several thousands of cast members. Martinez was the first cast member to reach this milestone, and was awarded a special Snow White and the Seven Dwarfs-themed service award by George A. Kalogridis, the president of the Disneyland Resort at a special ceremony held at the Main Street Opera House. At the ceremony, Martinez was asked if he was ready to retire, to which he responded that it would be a while before he “[hung his hat] up.” 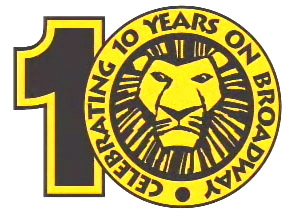 “The Lion King has touched live all over the world, and we are thrilled to celebrate this milestone.” – Thomas Schumacher, Producer for Disney Theatrical Group

On November 29, 2007, the musical version of The Lion King celebrated its tenth anniversary of being on Broadway with a gala performance. The celebration was delayed from its original November 11th date due to the 2007 Broadway Stagehands Strike, which closed all performances for a few weeks. The cast and crew had been celebrating with various activities, including appearances on Good Morning America, and the Empire State Building being lit up in yellow to commemorate the anniversary. By the tenth anniversary, over 45 million people worldwide had seen a performance of the show.

November 24, 2010 – Japan’s Version of the Beauty and the Beast Musical Celebrates Fifteen Years

On November 24, 2010, the cast of the Japanese version of the hit musical Beauty and the Beast celebrated 15 years at the Shiki Natsu Theater in Tokyo. The Japanese version opened in 1995, becoming the fifth version of the hit show. At the time in 2010, the show had done over 3,800 performances, with over 3.7 million guests and grossing more than $239 million, making it one of the longest running and most profitable musicals in Japan. The show toured around the country, ranging from performances in Osaka, to Sendai. The show continues to run in Japan, with performances beginning at the Shin Nagoya Musical Theater in Nagoya.