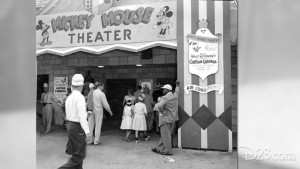 On August 27, 1955, the Mickey Mouse Club Theater opened in Disneyland’s Fantasyland. The air conditioned theater gave guests a chance to sit down and enjoy some of the classic Mickey Mouse and friends cartoon short films that had dominated the 1930s and 40s. The shorts available were on a rotating schedule, and the theater itself was only open to guests during peak periods at the park. At one point, the theater offered an event called the 3D Jamboree, where guests put on their 3-D glasses to enjoy the short films Melody and Working for Peanuts, which were introduced by the Mouseketeers. As the only theater in the park, until the Opera House opened in the Great Moments with Mr. Lincoln attraction, the theater was also used for special press conferences and cast member events. It was renamed the Fantasyland Theater in 1964, and was converted to a live performance venue. The theater closed on December 20, 1981, to make way for the new Pinocchio’s Daring Journey attraction, which would open in 1983.