August 26, 2009 – Keel Laying Ceremony is Held for the Disney Dream 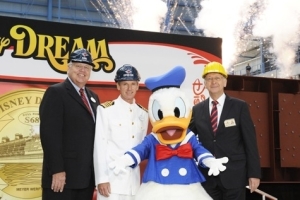 “Our fleet expansion will allow us to satisfy demand on both the East and West coasts of the United States while also giving us the flexibility to explore additional global destinations for our Guests.” – Karl Holz, President, Disney Cruise Line

On August 26, 2009, the keel laying ceremony for the third Disney Cruise Line ship, the Disney Dream, was held at the Meyer Werft Shipyard in Papenburg, Germany. This ship is the sister ship to the Disney Fantasy, which was also built at the German shipyard. The keel laying ceremony featured several special guests, including Disney Cruise Line President Karl Holz, ship’s captain Tom Forberg, and Donald Duck. The ship was finally completed in June, 2010.