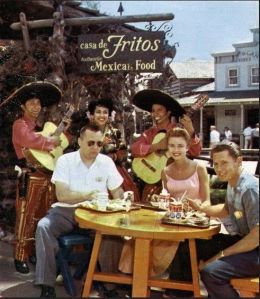 On August 11, 1955, the restaurant Casa de Fritos opened in Disneyland’s Frontierland. Serving Mexican food, the restaurant was famed for its specialty vending machine where kids could get a bag of Fritos chips by the Frito Kid. Guests could order dishes such as Frito Chili Pie for 55 cents, three tamales for 35 cents, and a Mexican combination plate for only $1.00; Fritos were provided for free with every dish. The restaurant was given an upgrade and a new name – Casa Mexicana – on October 1, 1982, and would go on to become Rancho del Zocalo on February 6, 2001.