On August 31, 1964, the ground-breaking ceremony for the new Anaheim Stadium was held, with the Disneyland Dapper Dans singing “Take Me Out to the Ballgame” in front of 4,000 guests and visiting dignitaries in an event known as the “Biggest Moment in Orange County Sports History.” The $24 million stadium is located just a few miles from Disneyland, and would be home for the eventually Disney-owned team the Anaheim Angels. The stadium was completed in 1966.

“This is the theme park you’re looking for.”

On April 14, 2016, the groundbreaking for the new Star Wars-themed lands took place at the Disneyland Resort and in Walt Disney World. This expansion of the park is the largest single-themed land expansion for the American Disney parks, spanning 14-acres. To celebrate this event, a 360-degree photo was released online to give guests an immersive experience in the building of the park, complete with appearances by R2-D2 and BB-8.

“Relax on warm sand and play in the sparkling blue waters of Disney’s Vero Beach Resort.”

On July 28, 1994, a special groundbreaking ceremony was held for the Disney Vacation Club’s new Vero Beach location. The first Disney resort built outside of Walt Disney World property, Vero Beach resort is located in the Treasure Coast Region; the design and theme of the resort was meant to represent this coastal line. The groundbreaking ceremony featured appearances by Mickey Mouse, Minnie Mouse, and Chip ‘n’ Dale, along with several Disney enthusiasts. The resort eventually opened on October 1, 1995.

“With a combination of thrilling rides, exotic landscapes and close encounters with wild animals, we are creating an entirely new experience for our guests.” – Michael Eisner, former chairman and CEO of the Walt Disney Company

On August 4, 1995, the newest addition to the Walt Disney World Resort, the Animal Kingdom Park, had its official groundbreaking. Plans were announced on June 21, 1995, with the park already called the largest theme park yet. The original name was the Wild Animal Kingdom, with the first word later dropped during production. Although many attractions were changed from 1995 to its opening in 1998, the centerpiece known as the Tree of Life was the one constant in its construction. The purpose of the park was to ramp up excitement about conservation with guests, as many members of the parks’ advisory board were conservationists and distinguished professors in the field of wildlife.

May 3, 1969 – The Groundbreaking for the California Institute of the Arts Takes Place 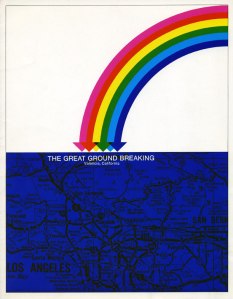 “Friends of California Institute of the Arts, I’m sure that you can understand and share with me the joy…in welcoming this new institution to our new and growing city of Valencia.” – Thomas Lowe, President of Newall Land & Farming Company

On May 3, 1969, ground was broken for the current campus of the California Institute of the Arts in Valencia, California. The school itself has a long history with the Walt Disney Company: the relationship between Walt and the Chouinard Art Institute began in 1929, when founder Nelbert Chouinard agreed to train Disney artists on a pay-later basis. Disney discovered many promising talents at Chouinard who went on to become prominent Disney artists, including Mary Blair. After Disney’s death in 1966, a large amount of his estate went to finance the construction of the new campus. Unfortunately, after the 1969 groundbreaking, construction of the school was hindered by torrential rains, labor trouble, and the 1971 earthquake. The campus finally opened in November of 1971.