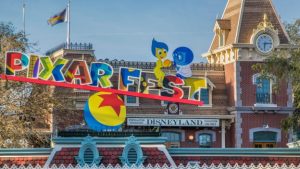 “Celebrating friendship and beyond!”

On September 3, 2018, the biggest Pixar celebration to come to Disney parks, called Pixar Fest, ended its run. Beginning on April 13, 2018, the celebration featured tributes to the beloved Pixar films, such as the nighttime show Together Forever – A Pixar Nighttime Spectacular, the new Pixar Play Parade, and a limited-engagement return of the popular Paint the Night Parade. Pixar short films were also on rotation at the Sunset Showcase Theater in Disney California Adventure, while guests could also enjoy the musical stylings of The Pixarmonic Orchestra in the Paradise Gardens area. Guests were also treated to special merchandise and food offerings during the event.

On February 12, 2013, the Pixar short film The Blue Umbrella made its debut at the Berlin International Film Festival; it would later be released alongside with the animated feature film Monsters University. The short was written and directed by Saschka Unseld, and features a score by Jon Brion. The film is notable for not starting in the traditional manner of a story department, but in the camera and staging department.

The short begins on a day that quickly becomes rainy, and the citizens of the city quickly pull out their umbrellas as the rain falls rhythmically on a city that becomes alive. Out of a sea of black umbrellas, one bright blue one marvels at the rain, until he spies a red umbrella next to him. He can’t help but stare at her, and she looks back at him, the mutual attraction between the two palpable. The two stay close to each other for a while, but are quickly separated as their owners go separate ways. The blue umbrella, realizing he’s about to be put away, uses the wind to free himself and fly across the city, on the lookout for the red umbrella. Spying her, he makes his way over, but is swept into the highway by a passing bus. The city tries to help him, but unfortunately, he is hit by a car and left on the sidewalk. His owner eventually finds him and pulls him up, and he is also greeted by the red umbrella, whose owner stopped to help. The pair are seen enjoying time together as their owners talk over coffee.

” I am Merida, firstborn descendant of Clan Dunbroch.”

On June 10, 2012, the Pixar animated feature Brave made its debut at the Seattle International Film Festival, weeks before its general United States release. The film was listed as one of the five special presentations at the festival, along with Diaz, The Last Reef 3D, People Like Us, and Trishna.