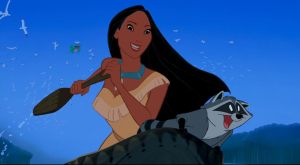 On November 11, 1995, the 23rd Annie Awards were held at the ATAS Plaza Theatre. The Disney Animated Feature Pocahontas was the frontrunner with seven nominations, and ended up winning four awards that night: Best Achievement in Production Design (awarded to art director Michael Giaimo), Best Achievement in Music (awarded to composer Alan Menken and lyricist Stephen Schwartz), Best Individual Achievement in Animation (awarded to Nik Ranieri, the supervising animator for the character of Meeko), and Best Animated Feature. Pocahontas won against the Walt Disney Television Animation feature film A Goofy Movie, and Rich Entertainment’s The Swan Princess.

“You’ll bring honor to us all.”

On November 13, 1998, the 26th Annie Awards were held in Glendale, California in the historic Alex Theater. Out of twelve nominations (with one category having three nominees), the Disney animated feature film Mulan walked away with ten awards, including Outstanding Achievement in an Animated Theatrical Feature, edging out Fox Animation Studios’ Anastasia, Bill Plympton’s I Married a Strange Person, and Warner Bros. Feature Animation Quest for Camelot. Other awards included:

On September 21, 2001, the Disney Channel Original Animated Series The Proud Family premiered. Although the first animated DCOS, it was not animated by Disney Television Animation, but by Jambalaya Studios and Y.R. Studio and distributed by Buena Vista Television. The series garnered good reviews from critics, and won several awards, including an Annie Award in 2004 for Outstanding Character Design in an Animated Television Production. The series ran for 3 seasons with 54 episodes, as well as an animated movie. The series was created by Bruce W. Smith, and the theme song, “Here Comes Penny Proud,” features the talents of Solange Knowles and Destiny’s Child. The series starred Kyla Pratt as Penny, Tommy Davidson as Oscar, Paula Jai Parker as Trudy, Jo Marie Payton as Suga Mama, Karen Malina White as Dijonay, Orlando Brown as Sticky, Alisa Reyes as LaCienega, and Soleil Moon Frye as Zoey.

The first episode, “Bring it On,” starts with cheerleading tryouts, with Penny’s best friend Dijonay as the captain. There’s only one position open, and the candidates are less than stellar. Penny is the shoe-in for the open part, until Dijonay’s old friend LaCienega tries for the role. She impresses everyone with her gymnastic abilities, and it turns out that LaCienega and Penny are tied for the open spot. Torn between the two, Dijonay decides to have a cheer-off. Back at Penny’s house, her father Oscar spies a moving van across the stree and starts spying on the new neighbors, much to the frustration of his wife Trudy. Oscar’s mother Suga Mama has already met the neighbors and invited them over for dinner, and Penny blanches when she finds that LaCienega is the new neighbor. Trudy tells Penny she should try and get to know her better, but Penny doubts it.

As the Boulevardes family comes over for dinner, Oscar and Felix bond over big screen televisions, while LaCienega sucks up to Trudy. Trudy buys into LaCienega’s act, and Penny is told to try and be her friend. When Penny tries again at school the next day, LaCienega snaps at her and tells her to shove off. Penny decides to sit with the Gross Sisters, the bullies of the school. When Penny admits that she wishes that LaCienega would go away, the Gross Sisters decide to help Penny out with her wish. Penny arrives home and complains that she won’t make the squad, as Dijonay is picking LaCienega. Suga Mama advises Penny to get a gimmick. Penny’s friend Sticky warns Penny that the Gross Sisters have rigged the stage to become a giant CD, and will cause LaCienega to fly off the stage. Reluctantly, Penny heads over to the school to stop their plan. Unfortunately, Penny accidentally sets off the trap, and pushes LaCienega out of the way, becoming the victim herself. Everyone watches as Penny is sent flying off the stage.

Later, Penny is seen limping onto the field on crutches, and LaCienega refuses to thank her for rescuing her. Dijonay apologizes to Penny after seeing LaCienega’s true colors, and tells her that Penny will always be her best friend. The episode ends with Oscar and Felix being caught by their wives in Felix’s home theater, as they pretended to be on a camping trip to get away from their “nagging wives.” 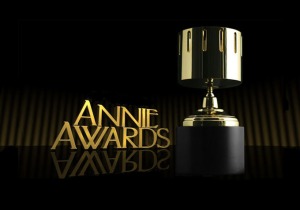 “Sweeping all nine categories it was nominated in, the Disney/Pixar collaboration Finding Nemo proved to be the big winner at the 31st annual Annie Awards.” 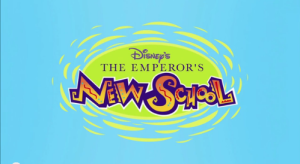 “Friends? I thought this was all about me! Spell my name again!”

On January 27, 2006, the Disney Channel animated series The Emperor’s New School premiered. Based on the Disney animated feature film The Emperor’s New Groove, the series takes place right after the events of the film, with main character Kuzco being given the task of graduating from school before being able to claim the throne. Having been banished from the palace until receiving his diploma, Kuzco is sent to live with Pacha and his family. The series ran for 52 episodes in 2 seasons. The series stars JP Manoux as Kuzco, Patrick Warburton as Kronk, Eartha Kitt as Yzma, Jessica DiCicco as Malina, Wendie Malick as Chicha, Fred Tatasciore as Pacha, and Rip Taylor as the Royal Records Keeper. Through its run, the series won several awards, including two Annie Awards for Best Voice Acting for actress Eartha Kitt as Yzma, and two Daytime Emmy Awards for Outstanding Performer in an Animated Program, also for Kitt’s performance. Patrick Warburton was nominated for an Annie in 2007 for his role of Kronk, and Jessica DiCicco was nominated for a Daytime Emmy in 2008 for her role of Malina; Howy Parkins was nominated for an Annie Award in 2008 for Best Directing in an Animated Television Production.

The first episode, entitled “Rabbit Face,” begins with Kuzco having been turned into a rabbit by Yzma. Yzma plans to make Kuzco fail at school so she can become Empress. Kuzco takes the viewers to a bit earlier in the day in PE to explain what happened. The gym teacher explains that a cross country test is coming up, but Kuzco refuses to participate in any activity, bringing in yet another doctor’s note excusing himself. The gym teacher is done with Kuzco’s excuses, and tells him that not only is he running the race, he will fail PE if he doesn’t win. Kronk then meets up with Principle Amzy, who is Yzma in disguise. She is confident that Kronk will win, therefore making her Empress. Around town, everyone is placing bets on Kronk to win, as Kuzco hasn’t exercised a day in his life.

Kronk stops by to intimidate Kuzco, leading to an awkward moment between everyone

That night, Kuzco overhears Pacha’s kids Tipo and Chaca saying how there was no way Kuzco could beat Kronk, and tries to pretend he’s not worried about the race. Pacha and Chicha are unconvinced, and Pacha reassures him that all Kuzco needs to do is his best. Kronk stops by Pacha’s house to say hello as he heads out on his nightly 20 mile jog. After he leaves, it turns out he was sent by Yzma to go and intimidate Kuzco, which worked well, as Kuzco went upstairs to his room and started to wail about what a loser he was. Pacha reassures him to do the best he can, and surprises Kuzco by setting up his treadmill for him, as well as setting up a specialized exercise program for him. Kuzco then heads off to the big race at school. Yzma sees how encouraged Kuzco is, and decides she won’t take any chances. She and Kronk head to the secret lab where she gets a potion to turn Kuzco into a turtle.

At lunch, Kronk brings Kuzco some “special dipping sauce” for his lunch, which contains the potion. Kuzco refuses to eat the sauce, but Kronk forces it into Kuzco’s mouth. However, it is soon evident that Kronk grabbed the wrong potion, turning Kuzco into a rabbit instead of a turtle. He runs into Malina, and alerts him that he’s turned into a rabbit. Kuzco begins to panic, and decides to hide in the locker room, resigned to failing PE. Malina shows up in the locker room, wanting to see that he was okay. She tells him that she wanted to catch up with him earlier, but he was running so fast she couldn’t catch up. Kuzco suddenly realizes that, as a rabbit, he’s much faster than Kronk, and goes off to win the race. Yzma is shocked to see that he’s a rabbit, and decides to sabotage the race as best she can, but Kuzco is able to win it in the end. Kuzco passes PE, and Yzma blames Kronk for the failure of her plan.