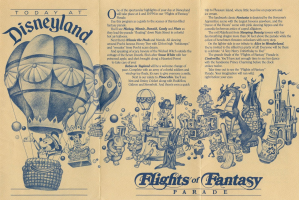 “Your imagination will run wild, right before your eyes.”

On September 10, 1983, the Flights of Fantasy Parade ended its run in Disneyland. Beginning on June 18, the parade featured floats and characters from rarely seen films, such as Babes in Toyland, Fantasia, and Pinocchio. The parade also featured Mickey and his friends “floating” into the parade in hot air balloons. This parade was also distinctive for being both a daytime and nighttime parade taking place at both 4pm and 10pm.