September 8, 2000 – The Disney Channel Original Movie The Other Me Premieres 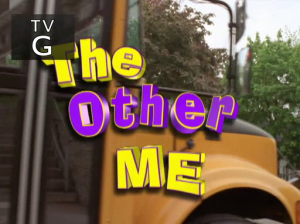 “That’s so amazing. You look like me, you talk like me, but you have a computer brain!”

On September 8, 2000, the Disney Channel Original Movie The Other Me premiered. It was based on the book Me Two by Mary C. Ryan. It was written by Jeff Schechter, and directed by Manny Coto. The film starred Andrew Lawrence as Will and Twoie, Scott McCord as Victor, Joe Grifasi as Conrad, Brenden Jefferson as Chuckie, and Tyler Hynes as Scottie DeSota.

Will Browning heads to school where he is constantly mocked for his yoyo, his hair, and more. His friend Chuckie reminds him that it’s report card day, and Will is positive that his method of skating by will see him through. Fellow classmate Heather has a crush on him, but he is less than receptive. Will gets his report card, and realizes that he may not be doing as well as he thought. He gets home to find more bad news: if he doesn’t pull up his grades, he will spend his summer at Camp Spartacus, a boot camp for boys. Will realizes that he needs to do well on his science project, though he has no confidence in his abilities. He finds an ad for Ocean Pups in the back of his comic, and decides to make this his project. Meanwhile, at the Ocean Pups lab, two scientists named Victor and Conrad have been working on a hypercloning project, and succeed in cloning a mouse. Unfortunately, one of the mice accidentally escapes and, while being chased by a cat, knocks over the cloning formula, which drips through a crack in the floor onto one of the Ocean Pups kits – the very one sent to Will. 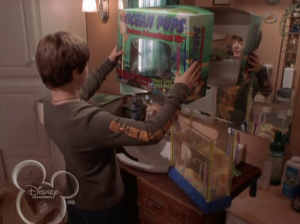 Will unloads his Ocean Pups kit, ready to begin his science project

Will gets home from school to find his new Ocean Pups kit waiting for him, and he quickly opens it. Missing the stirrer, he decides to use his comb instead, and the kit starts to bubble. Will watches in horror as the kit overflows, and calls customer service for help. When he looks again, he finds that he has created a clone of himself. Will recalls a lesson about cloning from science class, and realizes that he’s made himself a clone. Back at the Ocean Pups factory, the customer service rep has talked to Victor and Conrad, who are now panicked that their secret is out. Will has trouble of his own in training his clone to act normal. Will realizes that his clone is a genius, but has a hard time keeping the clone’s curiosity in check. Will names the clone Twoie, and decides to have him attend school in his place. Meanwhile, Victor and Conrad have found Will’s house, and stake out the place to find what Will may have cloned. When Will heads out with his family the next day to visit Grandpa Mordecai, he asks Twoie to stay inside, but Twoie longs to be outside to explore the world around him. Will is shocked when he gets home and finds Twoie missing.

Will is able to find Twoie thanks to their special telepathic link, but accidentally insults Twoie by telling him he’s “just a clone,” though all Twoie wants is a family. Will teaches Twoie how to act like him, and sends him to school. Chuckie is confused at the change of attitude in “Will,” while the real Will stays home and lounges. Things get even weirder at school when Twoie starts dancing in the middle of the cafeteria, starting a huge dance party for the entire school. In the span of a day, Twoie raises Will’s reputation at school, fixes the relationship and becomes close friends with bully Scotty, and gets a date with Heather to the social. Victor and Conrad show up at Will’s door to “respond to his inquiry,” but Will quickly brushes them off. As Victor and Conrad talk, they reveal that the clone would only have a three week lifespan. Will and Twoie spy on the pair from Will’s window, and knowing that they’re being spied on, the two are extra cautious about not being seen together. However, Will soon becomes bored with the arrangement, and misses his life. Twoie is confused as to why Will is upset about this, as he thought staying home all day was Will’s dream. However, as Twoie leaves the house and Will watches from the window, Conrad and Victor see the pair, and realize that Will has hypercloned himself.

Twoie manages to connect with Grandpa Mordecai, something the family has been unable to do

Will sends Twoie to visit Grandpa Mordecai, and gets Mordecai to finally come out of his stupor and interact with the family. When Twoie arrives home, Will is dismayed to find how much Twoie has changed his life, and is worried his family won’t love him once Twoie disappears and Will acts as himself again. The next day, Will decides to go to school, while Twoie stays home. Twoie tries to warn him about what’s going on at school, but Will rebuffs him. Will is shocked to find how popular he has become with the students and the teachers. When he gets home, Twoie is waiting for him, and Will is furious that everything good happens to Twoie, while Twoie is upset that no one knows about him. Twoie insists that not caring about what people think is why is he’s good at everything he does, but Will says that Twoie messed up his life. Twoie decides that he will leave for New York City, as he has no family. Will has Twoie attend the junior social in his place to act as a last farewell. Twoie heads off to his dance, but Will observes from the window that Victor and Conrad are close on his tail. Will spies on the pair and finds that they possess a potion to keep Twoie as a clone for longer than his intended lifespan. Will steals the potion and flees into the woods. Victor and Conrad then change plans: they will head to the school dance and kidnap “Will,” then torture him for information.

Twoie starts the dance party, unaware that Will has come to the school to rescue him. Will finds Chuckie and tries to explain that Chuckie’s been hanging with his clone the entire time, though Chuckie is less than convinced. Twoie has headed to the bathroom and realizes that he is sick, while Will covers for him on the dance floor, using the kids as a cover. Chuckie continues to look for Twoie, though he’s still unconvinced. Unfortunately, Will gets captured by Victor and Conrad, and Twoie is already boarding a bus to New York. However, Twoie realizes that Will is in trouble, and arrives to rescue Will. Will and Twoie team up to stop Victor and Conrad, with help from Chuckie and Scotty. Will gives Twoie the potion to give him a normal lifespan, much to the surprise of Chuckie and Scotty. The police arrive and arrest the scientists, and Will’s family shows up as well. Will explains that Twoie is his clone, and the family covers for him calling him Will’s identical cousin Gil. Back at home, Will explains the entire story, much to the confusion of his family. When Gil explains that he only wants a family, and everyone agrees to continue the ruse of Gil being an identical cousin.