“This is what you wanted, isn’t it: to humiliate me and make me quit? God forbid you had to work with the ugly girl your dad forced you to hire.”

On September 28, 2006, the comedy series Ugly Betty premiered on ABC. It was based on a telenova called Yo soy Betty, la fea, created by Fernando Gaitan. The first three seasons of the show were a hit for ABC, but loss of viewership and lack of a stable timeslot lead to the shows cancellation at the end of its fourth season, with 85 episodes in total. The series overall was awarded with 62 awards, including 3 Emmys and 2 Golden Globes. Ugly Betty was developed by Silvio Horta, and starred America Ferrera as Betty Suarez, Eric Mabius as Daniel Meade, Vanessa L. Williams as Wilhelmina Slater, Michael Urie as Marc St. James, Tonly Plana as Ignacio Suarez, Ana Ortiz as Hilda Suarez, Becki Newton as Amanda Tanen, and Mark Indelicato as Justin Suarez.

The pilot episode begins with Betty Suarez at an interview at Meade Publications, but based on her look, she is rejected before she can even enter. She follows the interviewer, trying to convince him, unaware that she’s being watched. At home, she takes care of her family, and lies to them about her interview, but her sister Hilda sees straight through her and tells her she might want to start looking at other options. Her father Ignacio supports Betty wholeheartedly, wanting her to chase after her dreams. Hilda then tells her that her boyfriend Walter wants to marry her, which surprises her. Walter soon stops by, and the two head outside. Hilda’s son Justin turns on the fashion channel, to find that the editor-in-chief of fashion magazine Mode, Fey Sommers, has passed away, and the son of the head of Meade Publications has been named as the new editor-in-chief. At Meade, Daniel Meade is seen doing more womanizing than running the publication, a fact not unnoticed by his father Bradford. 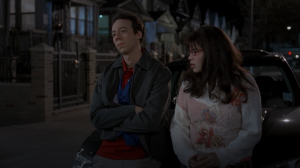 Just as things couldn’t get worse for Betty, her boyfriend Walter breaks up with her

Unfortunately for Betty, Walter is breaking up with her, as he has fallen for someone else. He leaves and she heads home, drowning her sorrows in flan. Suddenly, the phone rings, and Meade Publications is asking for her. She is given a job as the assistant to the editor-in-chief at Mode, and will be there first thing in the more. Justin asks her to dress fashionably, which the unfashionable Betty interprets as wearing a poncho she got from Guadalajara. When Betty tries to enter the meeting room for the staff meeting, she runs into a glass door, making an impression of the worst kind. Also making a late entrance is Wilhelmina Slater, the creative director who was passed over for editor-in-chief. Wilhelmina makes a scene, and ruins the meeting out of spite. Afterwards, Betty introduces herself to Daniel, who is shocked to find that she will be his new assistant. Betty starts her new assignment, researching Fabia Cosmetics, and Amanda assists Betty with gathering information, more on the office gossip side. Daniel reveals to his photographer friend Phillippe Michel that his father made him hire Betty, and Phillippe tells him that he needs to hire someone with a better image, and tells Daniel to make sure Betty quits within a week.

Betty’s first day doesn’t go very well, but she does make a friend named Christina, who works as a seamstress and manages the clothing owned by the magazine. Meanwhile, Bradford is feeding pigeons in the park, and is worried that Fey Sommers isn’t actually dead. Throughout the week, Daniel tortures Betty, making her do almost impossible tasks. Thanks to this, she misses her father’s birthday, and is unaware that Amanda is angling for her position by sleeping with Daniel. Late one night, she finally makes it home, and passes by Walter with his new girlfriend, further upsetting her. However, she channels her frustrations into a new idea for work. She tries to broach it with Daniel, but he ignores her. He sends her to “The Closet” to get one of the forgotten outfits for the shoot. While there, Betty admits to Christina that she doesn’t like her job, and Christina admits that Betty was hired to stop Daniel from sleeping with his assistants. Betty is heartbroken, but takes the outfit and heads to the shoot, accidentally leaving her idea behind. 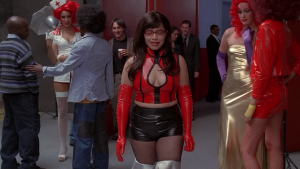 Betty decides to help Daniel by stepping in for the photo shoot, knowing full well the only reason she was hired

Betty arrives at the photo shoot, and Phillippe gets the idea to have her stand in for the test shots, which he thinks will speed up the process of Betty quitting. Daniel asks her, and Betty reluctantly agrees, much to the surprise of everyone. Everyone laughs at Betty, and Daniel finally defends her, telling Phillippe to stop. Betty grabs her bag and vacates, and when Daniel rushes after her, she tells him that she knows why she was hired before quitting, giving him what he wanted. The next day, Betty is home, drinking tea with her nephew, and finds out that her sister doesn’t believe in her. Meanwhile, Daniel presents the photo campaign for Fabia, who hates it. It turns out everyone was working against Daniel as they support Wilhelmina, but Bradford reluctantly gives Daniel one more chance to prove himself. Walter comes crawling back to Betty at the same time that Daniel stops by. Walter leaves, and Daniel apologizes to her, but she won’t hear it, as she feels his problems are never going to be as complicated as hers. Daniel admits that his brother passed away, and he couldn’t compare to his brother. He then says that he saw the layout she made, and wants to take her idea to Fabia and make her his assistant again. He gives her the night to think about it.

The next morning, Daniel is late to the meeting with Fabia, and Wilhelmina tries to take over the meeting before Daniel and Betty arrive. They show the rough version of Betty’s idea, a concept involving mothers and daughters. Betty has done her research, and  after giving statistics to convince Fabia, Daniel is given free reign over the campaign. Daniel tries to give Betty credit in front of Bradford, but Betty makes it look like it was Daniel’s. Afterwards, Betty meets with Daniel, and she is back at work. The episode ends with the beginning of a beautiful working relationship between the two.