“I can’t figure him out. He cares so much, but he sees so little.”

On August 23, 2002, the Disney Channel Original Movie A Ring of Endless Light premiered. It was loosely based on the Madeline L’Engle book of the same name, although the plot of the film veers greatly from the plot of the book. It is the first Disney adaptation of L’Engle’s work, with the second being A Wrinkle in Time in 2003. The movie was adapted by Marita Giovanni and Bruce Graham, and directed by Greg Beeman. It starred Mischa Barton as Vicky Austin, Ryan Merriman as Adam, Jared Padalecki as Zachary, Scarlett Pomers as Suzy, Soren Fulton as Rob, and Jame Whitmore as Grandfather.

The movie begins with Vicky Austin having a dream about being a mermaid, which quickly turns into a nightmare when she gets caught in a net. She wakes up on the ferry with her brother Rob and sister Suzy, making their way to their grandfather’s house for the summer. Vicky calls her mother soon after they arrive, and the call agitates her. That night, Vicky stays awake reading her physics textbook, when she notices her grandfather setting up Suzy’s telescope. She admits to her grandfather that she’s being pressured by her parents to work on her math and science scores for a new exceptional school. Her grandfather gives her present of a collection of Vicky’s poems, making her feel like a real author. Her grandfather is hiding a secret from his grandchildren: a serious medical condition.

The next morning, Vicky and Suzy meet Adam, a friend of their grandfather’s. He has an early admission to Harvard to study marine biology, and he invites Suzy and Vicky to go with him to the marine center. As they head there on their bikes, they run into Zachary Gray, who was Vicky’s boyfriend last summer. Vicky is angry that he never responded to her letters, and continues to the marine center. Suzy and Adam bond, as they are more science-minded, while Vicky is more creatively minded. Vicky interacts with one of the dolphins named Enid, and for some reason is able to read her mind, although she can’t explain why. Vicky heads back to the marine center to meet the dolphins, and ends up helping Adam with his research. They are able to use his contraption to call over Enid’s mate Basil, and once again, Vicky can tell how Basil feels without explaining it. Adam spies a gash on Basil’s skin, and believes them to be the drift nets, which are illegal.

Vicky spends time with her brother and sister, and once again meets with Zachary. He apologizes again, although he doesn’t seem very sincere about it, although she softens when she hears that his mother died. Rob goes into the ocean to retrieve his Frisbee, although he can’t swim; while Vicky is talking with Zachary, she senses that Rob is in danger and runs into the ocean. A dolphin helps Rob out of the water and leads him back to the shore. Later, Vicky accompanies her grandfather around town, and is confused as to why people are asking him if he’s okay. She admits to her grandfather that she seems to be able to hear what the dolphins are saying. He believes her, although he dodges her questions about his health. Vicky continues to date Zachary, who is still acting out thanks to his mother’s death and his father’s cold demeanor. Adam comes across them on their date, and accuses Zachary’s father of using drift nets. Zachary had no idea about the nets, but decides to help Vicky and Adam find out if his father is using the illegal nets. 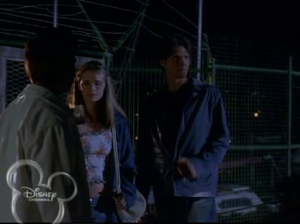 They sneak into the marina boat area that night to search for the net, but are caught by the captain of the boat; Adam is able to determine before they are caught that Zachary’s dad is using drift nets. Vicky continues to have dreams about being a mermaid and communicating with the dolphins, although she also starts dreaming of Adam. The next day, Vicky sends Zachary a bouquet of roses, and Adam unexpectedly joins the family for dinner. They listen to Adam’s story as to how he became interested in dolphins and marine biology, although Vicky and Adam argue about the difference between logic and emotion. The cop arrives, and tells them that he couldn’t find drift nets on the Marie Rose, and a frustrated Adam storms out. Vicky can’t understand Adam, as he seems to care a lot, but only cares about proving things, as “that’s what scientists do,” he claims. Her grandfather uses the stars to make an analogy about not being able to see a person’s full self, that their true light may not have reached others yet.

Zachary and his father have a very terse conversation about maintaining their lifestyle, and Zachary asks his father if he uses drift nets, but his father refuses to answer. Vicky heads to the marine center to find that Enid is having a difficult delivery. Vicky knows that Enid needs Basil with her, and not to be sedated during the delivery. Adam lets Basil in, and Basil helps Enid with the delivery. Adam and the research team ask Vicky what happened, but Vicky refuses to answer. Adam confronts her, as he realizes that she can communicate with the dolphins telepathically. He starts treating her like a science experiment, and she storms away. Meanwhile, Zachary does research on his own to find that his dad is using drift nets. Later, Adam finds Vicky and tries to talk with her, although she gets angry when he brings up science and data again, as she feels like there are things is this world that aren’t meant to be explained. Adam admits that he’s jealous, as he wishes he could communicate with dolphins like she can. They finally become friends again. Vicky is confused about her feelings for Zachary and Adam, and can’t seem t decide between them. 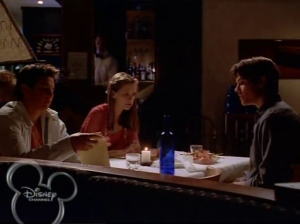 Zachary invites Adam on his date with Vicky to show the proof of the use of the drift nets.

Vicky later goes out to dinner with Zachary, and Vicky is surprised to find that Zachary invited Adam. Zachary shows them the evidence of the use of drift nets, but Adam tells them that they need to actually catch them in the act using nets. Later, after Vicky’s gone home, Adam asks Vicky to teach him how to dance, and they start to talk about her writing. The two end up sharing a kiss, and she agrees to help him with his research. They head into the water the next day, and Vicky tries to communicate with the dolphins. Soon, the dolphins surround them, and Vicky asks them to perform at trick to prove she can communicate. She then asks them why they returned to the sea, and she goes deep into the water as she listens, scaring Adam, who later tells her that she shouted something, calmly walked out and sat down on the beach. She later explains that the dolphins tried to answer her question, but she couldn’t understand it, although she knows that the dolphins are connected to everything. When she gets home, Zachary is waiting for her to take her out to catch the bad guy. He admits that he’s in competition with Adam for Vicky’s affections before deciding to play a game of chicken with an approaching boat. Vicky is furious.

Later that night, Vicky finds her grandfather collapsed on the floor and confused. He still won’t tell her what is wrong with him right away, but he finally admits to Vicky that he’s dying from leukemia. She doesn’t want to lose the only person who understands her, but he tells her that she’ll meet many more like-minded people through her poetry. Later, on the beach, she and Adam are talking, when Vicky senses trouble in the water. She knows that the drift net has caught Enid, and they call Zachary to help them. Zachary’s father demands that Zachary get back to his company’s party, but Zachary refuses and decides to help Vicky and Adam. They come across the boat that has captured Enid, and Vicky calls her grandfather, who will help them bring over the marina police. As they get closer, the net is being pulled in, and Vicky jumps into the water to save Enid before it’s too late. Adam jumps in to help cut Enid out with some pliers. They are able to save Enid, but Adam gets tangled in the net and is pulled under. The dolphins return to help keep Adam conscious, and he has visions of Vicky as a mermaid. She quickly appears and helps get Adam out, while the harbor patrol catches the Marie Rose in the act of using drift nets. 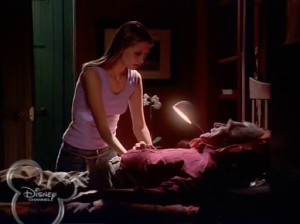 Vicky finds her grandfather dying, and comforts him in his final hours

After the day’s events, Adam reveals that the dolphins spoke to him just once. Vicky’s grandfather takes her home, and heads inside, worn out. That night, Vicky comes to check on her grandfather, who is fading fast. She wants to call a doctor, but he refuses, as he feels it is his time to go. He tells her not to let her light go out, and she should let it shine for the whole world. He passes away soon after, and a star shines brightly in the sky. The next morning, the kids are upset at his sudden death, and their parents are on their way. Vicky then has a good conversation about life with her little brother before their parents arrive. They all head home soon after, with Adam at the ferry wishing Vicky goodbye. He tells her that he enjoyed her poems, and she has decided to show them to the literary magazine at her school. He promises to write her, and she agrees to as well. As they head back, the dolphins also appear to wish Vicky goodbye.