July 29, 2007 – The Broadway Musical Beauty and the Beast Closes

“A ‘tale as old as time’ reached the end of the line July 20 when Beauty and the Beast gave its 5,464th – and final – Broadway performance and at last took its leave of the Lunt-Fontanne…”

On July 29, 2007, after 46 previews and 5,461 performances, the Broadway musical Beauty and the Beast closed at the Lunt-Fontanne Theatre. As of 2018, it is the tenth-longest running musical on Broadway, and has had several national tours. Former Disney CEO Michael Eisner, who was instrumental in bringing Disney to the Great White Way, was present at this final performance, as were many fans, friends, and special cast members. Recording artist Donny Osmond reprised his role as Gaston for the final show, with Anneliese Van Der Pol and Steve Blanchard playing the role of Belle and the Beast, respectfully. 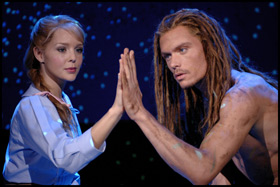 On October 19, 2008, the third international production of the musical Tarzan opened in Hamburg, German, at the Neue Flora Theater. It was jointly produced by Walt Disney Theatrical and Stage Entertainment. The first run of the musical featured Anton Zetterholm as Tarzan and Elisabeth Hübert as Jane; the pair were the winners of the reality program Ich Tarzan, Du Jane, with producers looking for the leads of the show. The production ran for five years, and a cast album was released.

October 11, 2008 – The Russian Version of the Musical Beauty and the Beast Opens 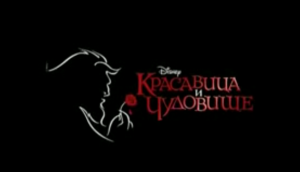 “Record ticket sales and huge interest from the media demonstrate that the Russian theatre-going audience is really looking forward to seeing this brilliant and highly entertaining show.” – Producer Dmitry Bogachev

On October 11, 2008, the first Russian-language production of a Disney musical, Beauty and the Beast, opened in Moscow’s MDM Theatre. Disney Theatrical Group worked with Stage Entertainment to bring the show to Russia almost fifteen years since the show originally began on Broadway. Igor Ivanov, cast as the Prince, won his role through a reality program called Find Your Prince. Actresses Natalia Bystrova and Ekaterina Guseva shared the role of Belle.

August 30, 2009 – The Little Mermaid Has Final Performance on Broadway

“We are closing the Broadway production to concentrate on the long future life of this title – beginning with next year’s national tour and upcoming international productions.” – Producer and President of Disney Theatrical Productions Thomas Schumacher

On August 30, 2009, the Broadway musical The Little Mermaid had its final performance in the Lunt-Fontanne Theatre, closing after 685 performances. The production, which began with previews on November 3, 2007, received positive reviews from family audiences, but a rather lukewarm response from critics. The musical was scheduled to begin its national tour in 2010, and was retooled by Glenn Casale after the show closed on Broadway. The final run featured Chelsea Morgan Stock as Ariel, Faith Prince as Ursula, Drew Seeley as Prince Eric, Norm Lewis as King Triton, Rogelio Douglas Jr. as Sebastian, Eddie Korbich as Scuttle, Jonathan Freeman as Grimsby, Tyler Maynard as Flotsam, Eric LaJuan Summers as Jetsam, Robert Creighton as Chef Louis, and Trevor Braun, Major Curda, and Brian D’Addario alternating in the role of Flounder.

August 8, 1995 – The Canada Premiere Production of Beauty and the Beast Begins in Toronto 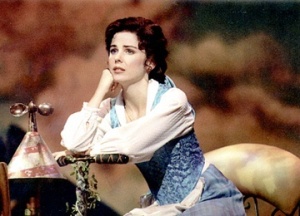 “It’s the biggest, most spectacular musical to come to Toronto, ever.”

On August 8, 1995, the Canadian production of the hit Broadway musical Beauty and the Beast opened at the Princess of Wales Theater in Toronto, Canada. It was one of the earliest international productions of the show, following Australia’s version in July of the same year. The original cast included Kerry Butler as Belle, Chuck Wagner as Beast, Dan R. Chameroy as Gaston, Cliff Saunders and Lefou, and Terry Doyle as Maurice. The musical ran until 1998.

May 8, 2006 – The Leads for the Broadway Version of the Mary Poppins Musical Are Announced 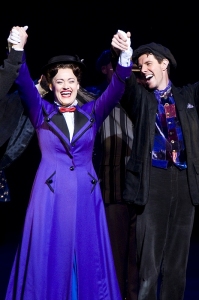 “We are delighted that Ashley and Gavin will bring these two legendary characters to life at the New Amsterdam Theater.”

On May 8, 2006, the American production of Mary Poppins officially announced its leads: Ashley Brown as Mary, and Gavin Lee as Bert. Brown had previous experience with Disney Theatrical, starring in the touring show On the Record, and making her Broadway debut as Belle in Beauty and the Beast. Lee had originated the role of Bert in the West End Production, and was brought to Broadway thanks to his charming interpretation of the character. It was also announced that the official Broadway production would open November 16. 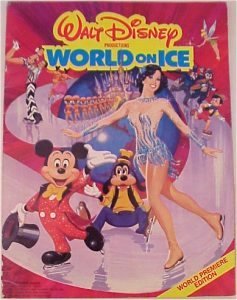 On July 14, 1981, Disney’s first edition of the ice show, World on Ice premiered in East Rutherford, New Jersey. It was and continues to be produced by Feld Entertainment, and toured 20 major cities within the United States. The show was popular enough to continue with a new theme each year, including Great Ice Odyssey in 1982, Magic Kingdom on Ice in 1983, and Happy Birthday! Donald in 1984. The themes would continue, but run for several years at a time, usually promoting a Disney film (as in the cases of Aladdin and Toy Story). In 1986, the show became international with a tour in Japan, and by 1994, the show had grown to seven productions on six continents. In 1996, the show overall show was renamed to its current moniker, Disney on Ice. The show in a part of the Disney Theatrical Group. 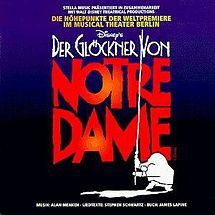 “…two lost souls finally find each other. People will cry, but they’ll be moved. And it is a very romantic ending.” – Translator Michael Kunze

On June 5, 1999, the stage musical version of Disney’s The Hunchback of Notre Dame, retitled in German as Der Glöckner von Notre Dame, premiered at the Stella Musical Theater at Potsamer Platz in Berlin. The music was written by Alan Menken and Stephen Schwartz, who added nine new songs, and the book was written by James Lapine. It was the first musical by Walt Disney Theatrical to premiere outside of the United States. Although based on the animated film, the overall musical is much darker, with many striking differences: the gargoyles are renamed Charles, Antoine, and Loni, and are firmly established as figments of Quasimodo’s imagination; Frollo has a background as a priest, hearkening back to Victor Hugo’s original manuscript; the animals Djali the goat and Phoebus’ horse Achilles are cut from the musical; and many other changes. The original cast includes Drew Sarich as Quasimodo, Judy Weiss as Esmeralda, Fredrik Lycke as Phoebus, Jens Janke as Clopin, Norbert Lamla as Frollo, Valentin Zahn as Charles, Yvonne Ritz Andersen as Loni, Tamas Ferkay as Antoine, and Carlo Lauber as the Archdeacon. The musical was quite successful, and ran for three years before closing in June 2002. The popularity of the musical has led to the production of a Broadway version, which will, as of this date, be running at the Paper Mill Playhouse from March 4 through April 5, 2015.