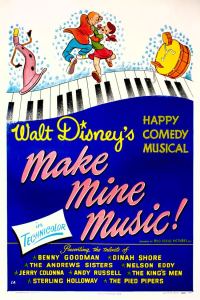 “Make mine music and my heart will sing.”

On April 20, 1946, the 8th animated feature film Make Mind Music premiered in New York City. The film was one of the package films that were released during the wartime period; as resources were diverted to training and propaganda films, making a full-length animated feature was impossible. It was decided that, to make much-needed income for the studio, shorter segments would be made and compiled into a feature film. The film featured what Walt affectionately called “ghost stars,” as the voices in the film were well-known stars who were not seen on film, but usually featured in a narration role. The film was eventually released nationwide on August 15, 1946.