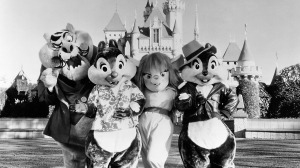 On March 15, 1991, the Rescue Rangers Raceway opened in Disneyland. As part of a promotion for the Disney Afternoon programming block, the attraction Fantasyland Autopia was redesigned to feature the characters from the hit show Chip ‘n’ Dale: Rescue Rangers in the form of cutouts and, sometimes, characters to meet-and-greet near the show if crowds were low. The attraction returned to its original Autopia form on November 10, 1991.