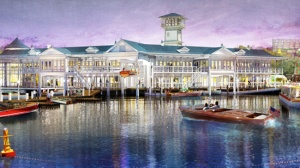 “Our fundamental goal is to create a welcoming, comfortable space where families can enjoy time together and instantaneously feel right at home.”

On March 14, 2013, Walt Disney World, and Walt Disney Company COO Tom Staggs, officially announced the revamp of the former Downtown Disney area, now known as Disney Springs. The shopping area was to be expanded significantly, with the number of stores jumping from 75 to over 150. Staggs announced that this would be a massive undertaking that would open in phases, and the whole area would consist of four districts: Town Center, The Landing, Marketplace, and West Side.