December 17, 1961 – The Babes in Toyland Exhibit Opens in Disneyland 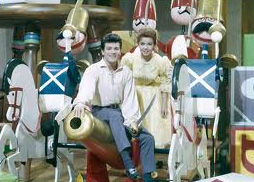 On December 17, 1961, the Babes in Toyland exhibit attraction opened in Disneyland’s Opera House. It was a similar concept to the 20,000 Leagues Under the Sea exhibit, where elaborate sets from the live-action feature were put on display for guests to walk through and experience. The Babes in Toyland exhibit, however, did not match the previous success of its predecessor. It was closed on September 30, 1963. Although the attraction closed and the sets were removed, thenmovie, however, did contain an element that would become a lasting part of Disney Parks: the toy soldiers from the film would eventually become the toy soldiers in the Disney Park holiday parades.