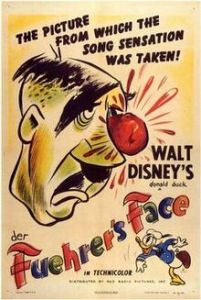 On March 4, 1943, the 15th Academy Awards were held at the Coconut Grove in Los Angeles, California. The Disney propaganda short film Der Fuehrer’s Face won the Academy Award for Best Animated Short Film, beating out the likes of All Out for V, Blitz Wolf, Juke Box Jamboree, Pigs in a Polka, and Tulips Shall Grow. Most of the shorts in this category, including Der Fuehrer’s Face, ridiculed the brainwashing tactics of Nazism and were very anti-German, save for Pigs in a Polka, which parodied Disney’s Three Little Pigs and Fantasia. The song for Der Fuehrer’s Face, written by studio composer Oliver Wallace, also proved to be very popular after it was recorded by Spike Jones and His City Slickers.