April 18, 1953 – The Mickey Mouse Short Film The Simple Things is Released to Theaters 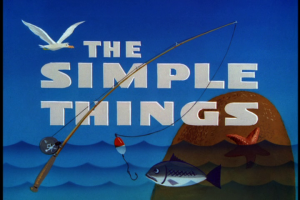 “It’s the simple things that give my heart its wings, like fishing on a sunny day.”

It’s a beautiful day at the beach, with Mickey and Pluto set out to go fishing. Pluto is more confounded by the creatures he discovers than anything, and ends up fighting with a clam. The clam attaches itself to Pluto’s tail, and ends up accidentally in Pluto’s mouth. When Pluto tries to get Mickey to help him, Mickey mistakes Pluto as wanting some food. The clam then eats the treat Mickey provides, as well as Mickey’s sandwich. As the clam accidentally swallows the pepper in Mickey’s hand, he sneezes himself out of Pluto’s mouth into Mickey’s hand. The sneezing clam flees, sneezing all the way into the water. Pluto loses another treat to a nearby gull, and has to contend with nothing but bait. Mickey almost loses his bait to the gull who stole Pluto’s food, but he manages to steal one finally from Mickey. Mickey chases the gull away, so he thinks, but the gull is able to get inside the bait bucket and eat more of the fish – until he gets chased away by Pluto. The determined gull strikes back, however, and beats the poor pup before settling back for another pass at the bucket. Mickey chases the gull up and down the beach, but are soon chased away by a whole flock of gulls that want fresh fish.