July 28, 1987 – The Special Computer-Animated Short Film Oilspot and Lipstick is Released at SIGGRAPH 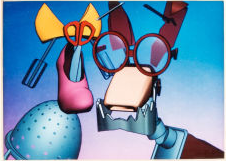 On July 28, 1987, the special short film Oilspot and Lipstick was released at the Special Interest Group on Graphics and Interactive Techniques conference, known as SIGGRAPH. The film was one of Disney’s earliest attempts at computer animation. It featured two dogs made out of junkyard parts, with a junkyard monster threatening the life of the female, Lipstick; she is rescued by the male dog, Oilspot.