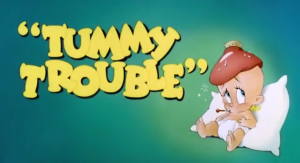 “Don’t worry about a thing! I’ve learned my lesson! I’m a reformed rabbit! A better bunny! A happy hare!”

On June 23, 1989, the Roger Rabbit short film Tummy Trouble was released to theaters. It was the first short Disney had worked on in 24 years, and featured the characters from the hit film Who Framed Roger Rabbit. Tummy Trouble was the first in a series of three Roger Rabbit shorts, with a fourth one planned but cancelled. A Hidden Mickey can also be found in this short film. The animation was directed by Rob Minkoff, with the live action directed by Frank Marshall. It starred Charles Fleischer as Roger, April Winchell as Mom and Baby Herman, Lou Hirsch as Baby Herman, and Kathleen Turner as Jessica Rabbit.

The short begins with Uncle Roger being asked to take care of Baby Herman again, though he is warned to not mess things up like the previous time. After his mother leaves, Baby Herman starts wailing and throwing a tantrum, but Roger is prepared with a baby rattle. Unfortunately for Roger, Baby Herman swallows the rattle, and Roger screams out to call 911. At the hospital, Roger cries out that he wished this tragedy had befallen him. He then gives a hungry Baby Herman his bottle, and when Roger burps him, several things pop out, including the kitchen sink. The rattle then pops out, but Roger ends up swallowing it by accident. Baby Herman starts to cry, but is cheered up when Roger starts dancing, as the rattle shakes inside. Roger, instead of Baby Herman, is wheeled into surgery to remove the rattle. Meanwhile, Jessica is walking down the hall with a cart full of bottles, and Baby Herman follows her, hoping to retrieve a bottle. He then starts chasing one that has slipped from her cart and bounces down the hallway.

Roger tries to dodge his surgeons, but finds himself quickly captured. They pull out a chainsaw to cut him open, but soon leave for lunch. Baby Herman enters the room, still chasing a bottle, when he gets distracted by what he thinks is a giant bottle, but is really a large surgical laser. Baby Herman ends up causing more chaos within the room, sending hypodermic needles flying across the room and sending the pair flying across the hall into an elevator shaft. Baby Herman manages to save himself (though does accidentally swallow the rattle again) while Roger is crushed by the elevator. When looking for Herman again, the pair are caught on the rocketing laser, and fly into a pile of highly flammable chemical tanks. The pair are blasted into the sky, and the pair are both free of the rattle. Roger is ecstatic – until he sees the hospital bill. Even worse, Baby Herman swallows that rattle again. The short ends with Jessica taking Roger home to play a game of patty-cake.