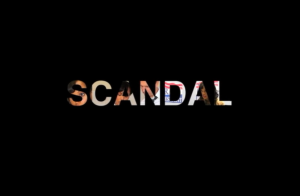 The first episode, “Sweet Baby,” begins with lawyer Quinn Perkins trying to cancel a blind date with a man named Harrison Wright, but he informs her that it’s not a blind date, it’s a job interview. She’s not interested, until she hears that he works for Olivia Pope, and he tells her that Olivia has already given her the job. Meanwhile, Olivia is heading to an important meeting with Stephen Finch, who is rather nervous. Olivia drops off $3 million to Russian mobsters from an ambassador, and Olivia sweet-talks her way out of a situation when she is $3 million dollars short, but still able to take what they paid for. Wright brings Perkins into the office, and she meets the team, and what Olivia had to buy: the ambassador’s baby. As everyone gets ready to head home, someone heads into the office, bloodied, claiming that the police think he killed his girlfriend. 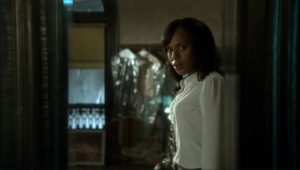 Olivia watches as they start the process of questioning Sullivan St. James

The client in question, Lieutenant Colonel Sullivan St. James, is a war hero; he is the first living soldier awarded the Medal of Honor since Vietnam. Pope then explains the process of how they work to Perkins, beginning with interviewing him intensely, claiming that they are both the judge and the jury, and decide who he is. Pope has the deciding vote, and then sets the rules and warns them: do not lie, or all bets are off. Pope then begins her work, showing up at Assistant U.S. Attorney David Rosen’s house in the middle of the night, asking for 48-hours before they charge St. James, but he only gives her 24. Her team sets to work collecting evidence in the little time they have, although most think he’s guilty. In the middle of it, Pope is called to the White House by Cyrus Rutherford Beene, the White House Chief of Staff, because the President needs a favor: an aide is claiming that she is sleeping with the President, and Pope needs to shut her down. She then heads to Camp David to talk to the President, but everyone thinks that the President wants to give Pope her old job at the White House.

The team goes deeper in their investigation, discovering that St. James’ girlfriend was supposed to go to a French Consulate dinner, but cancelled at the last minute. The girlfriend used to be a party girl, and gave it up when she met St. James, but is still holding something back: the girlfriend is sleeping with someone else. Pope talks to the President, and they talk about intern Amanda Tanner, and the President denies ever sleeping with Tanner. Pope agrees to take the case, but turns down going back to the White House. Later, Perkins and Pope meet with Tanner in the park, and warn her about spreading lies, with the added bonus of convincing her to hand in her resignation and leave Washington DC. Later, Perkins is found crying in the bathroom, as she is shocked at how cold Pope is. As Pope continues to work her case, the St. James case is falling apart, as he knew that his girlfriend was sleeping with someone else, but he still claims that he did not kill her. 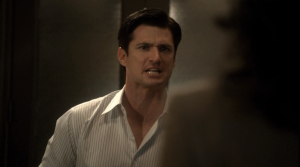 Time is up when the cops arrive at Pope’s office, but the team gets a lucky break with a security camera outside a bar, and are able to verify his alibi, at a price: St. James is meeting his boyfriend. St. James, however, would rather go to jail than admit that he’s gay. He allows himself to be arrested, much to the sadness of the team. As Pope heads to the police station, tech guy Huck tells Perkins that he got a message from an Amanda Tanner, who was admitted to the hospital for a suicide attempt. Pope still doesn’t believe Tanner’s story, until Perkins drops a supposed “pet name” from the President, and Pope heads straight for the White House. Pope confronts the President, who finally admits the truth: he had an affair because Pope had left him. Pope left him because he is married, revealing that the two also had an affair. While the President kisses Pope, Beene walks in, who never knew about Pope’s real relationship with the President. Pope quickly leaves and heads to a restaurant to meet with Finch, who is nervous about proposing to his girlfriend, as he doesn’t think of himself as a good guy. Pope convinces him to propose, and she watches before she hides and thinks about her own problems.

Pope heads back to the jail to talk to St. James, and convinces him to give her the name of his lover so she can secure his alibi. In the end, St. James gives a speech after getting cleared, and announces that he is gay. The case being over, the team clears up the office, although Perkins isn’t convinced that they are the “good guys.” As Pope works, Beene comes to her office, but Pope refuses to talk to the President again, especially since Tanner has become her client.