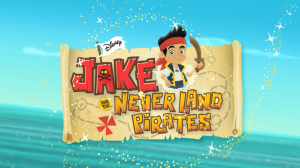 “It’s truly a pleasure to make off with your treasure!”

On February 14, 2011, the Disney Junior show Jake and the Never Land Pirates premiered. Based on the story Peter Pan by J.M. Barrie, as well as the Disney film version of the story, the series involves three children who form the Never Land Pirates, tasked by Peter Pan to protect Never Land in his absence from Captain Hook and Mr. Smee. The series has received many positive reviews from critics, and the character of Jake has become the breakout character, leading to appearances in the Disney parks among other aspects. The series was created by Bobs Gannaway and is directed by Howy Parkins. It stars Colin Ford, Cameron Boyce, and Sean Ryan Fox as Jake, Madison Pettis and Megan Richie as Izzy, Jonathan Morgan Heit and Jadon Sand as Cubby, David Arquette as Skully, Corey Burton as Hook, and Jeff Bennett as Mr. Smee.

The first segment, “Hide the Hideout,” begins with Jake, Izzy, and Cubby building a sandcastle on the beach, but before long Skully the parrot warns the group that Hook’s ship, the Jolly Roger, is on its way to their shores. Hook has a plan to find where Jake’s hideout is, and will travel the entire island to claim Jake’s hideout for himself. Cubby wants to hide, and Jake declares they need to hide the hideout from Hook. The group readies themselves with their tools: Jake with his sword, Cubby with his map, and Izzy with her pixie dust. The group then runs to a special tiki statue that contains a lever to open the door to the hideout. Inside, the three work hard to seal their hideout away from Captain Hook. Jake is certain that their hideout is sufficiently hidden.

Hook searches everywhere for Jake’s hideout, but doesn’t realize the door’s secret lever is right behind him

Hook arrives at the island and searches for the hideout, but is unable to find anything, although he accidentally keeps opening the door to the hideout without noticing. Unfortunately, one of the hatch doors is still open, which could reveal the hideout. Jake decides that they need to distract Hook and close the hatch. Izzy comes up with an idea to distract hook with monkey noises while Cubby crawls up to the hatch. At the top of the hill, Cubby uses a water cannon to push Hook and Smee from the hill and into the ocean. As they try again, Hook falls down a hollow tree and goes through a slide through the hideout, though his hat obstructs his view. Eventually, Hook is able to find a door in the side of a hill, and Cubby decides to stop Hook by pretending to be a fly with the use of Izzy’s pixie dust. Hook is once again sent through the inner workings of the hideout and out into the ocean. In the end, Hook catches a cold from falling in the water, and Smee takes him back to the ship to recover. The group celebrates with a song.

The second segment, “The Old Shell Game,” starts with the group playing a game on the beach, when Izzy finds a beautiful sea shell. Hook, however, also spies the shell and decides to take it for his own collection. Hook manages to steal it from Izzy using a plunger, but Jake vows to steal it back from Hook. The group boards their ship and heads off after Hook, and works on a plan to get it back. They decide to first ask nicely, but Hook tells them that he will never give it back. Smee then notices that the shell is missing, and both groups find that it’s floating on a log in the ocean. As it travels through a group of rocks, both ships have to avoid the rock formations, but Jake’s ship Bucky sets up the raft for the group. Between Hook’s rowboat and Jake’s raft, it’s a race for the shell. Jake and the group manage to beat Hook to the shell, just barely, only to find the seashell has moved to a high cliff. Skully manages to claim the seashell from Hook, but Hook is able to nab it in the end, only to have it pinch him. Izzy finally manages to get her shell from Hook after using some pixie dust to fly, and although she’s happy to have her shell back, she finds that there’s a hermit crab living in the shell. They take the crab back to Pirate Island, and Izzy allows the crab to keep his shell. The episode ends with a musical performance by the Never Land Pirate Band.