July 21, 1950 – The Pluto Short Film Pests of the West is Released to Theaters 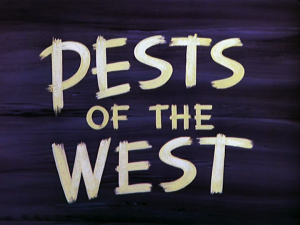 On July 21, 1950, the Pluto short film Pests of the West was released to theaters. It is considered a sequel to the 1949 short Sheep Dog, featuring the duo of Bent-Tail the coyote and his son. It was directed by Charles Nichols, with story by Dick Kinney and Milt Schaffer.

Bent-Tail is seen howling on top of some rocks, when he spies a nearby farm. He and his son quickly race to the farm, and imagine the chickens they’re going to steal. As they sneak onto the farm, they pass by Pluto’s doghouse, where he is dozing peacefully. His dozing is disturbed slightly, however, when his nose catches the scent of the coyotes. Meanwhile, Bent-Tail and his son reach the hen house, and quickly make a plan for the son to go in and steal a hen. He attempts to steal the largest hen inside when he gets sleepy, and decides to nap in an empty nest. Bent-Tail looks inside to see what’s keeping his son, and is angered to see his son sleeping on the job. He rushes inside and throws his son out so he can do the job himself. The squawking of the hens wakes Pluto, and he son chases the wily coyotes across the farm. They end up hiding in Pluto’s doghouse, and when Pluto goes back to his nap, he is unaware that the coyotes are in hiding. Unfortunately, Pluto does find them, and chases Bent-Tail across the farm once again. Bent-Tail uses plenty of tricks to sneak away, but Pluto manages to catch him in the end. Bent-Tail’s son manages to sneak away with a hen in its nest, and it becomes a strange game between the coyotes and Pluto to “get the hen.” Pluto manages a sneaky trade of the hen for the son, and Bent-Tail runs off with the nest, thinking that he got the best of Pluto. The little coyote, however, holds up an egg, which Bent-Tail smashes over his son’s head, although his son can’t understand why his father is so upset.