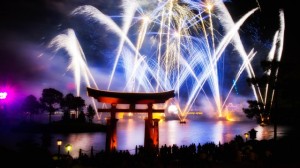 “Behold the past, present, and future of Earth at this stunning fireworks show that celebrates the spirit of humanity.”

On January 30, 1988, the nighttime fireworks show IllumiNations began its run in Epcot’s World Showcase area, replacing the Laserphonic Fantasy. This show, featuring fireworks, lasers, fountains, and music, was originally sponsored by General Electric, although General Electric ended its sponsorship in December of 2002. Each area of the World Showcase was individually showcased with music highlighting the country, along with a spectacular laser show. The show ended with a fireworks show and symphonic music before the Epcot park closed for the night. Variations of the show have been created: IllumiNations 25 celebrated the 25th Anniversary of Walt Disney World, and IllumiNations 2000: Reflections of Earth was introduced to celebrate the millennium. IllumiNations 2000: Reflections of Earth has continued since its introduction in 1999, although it has dropped “2000” from its title.