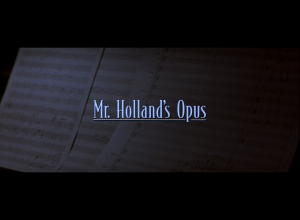 “Mrs. Jacobs, you tell them that I am teaching music, and that I will use anything from Beethoven to Billie Holiday to rock and roll if I think it’ll help me teach a student to love music.”

On December 29, 1995, the Hollywood Pictures film Mr. Holland’s Opus was released in Los Angeles, to be considered for Academy Award consideration. The film tells the story of Glen Holland over his thirty years of teaching music. The film was shot on location in Portland, Oregon, specifically at Grant High School; the drama teacher at the school brought in many current and former students to be extras in the film. Richard Dreyfuss, playing the lead role of Glen Holland, was nominated for a Best Actor Academy Award. The film was written by Patrick Sheane Duncan and directed by Stephen Herek, with music by Michael Kamen. The film stars Richard Dreyfuss as Glen Holland, Glenne Headly as Iris, Jay Thomas as Bill Meister, Olympia Dukakis as Principal Helen Jacobs, and William H. Macy as Gene Wolters.

In 1965, young Glen Holland is seen at the piano composing, hearing the grand sounds of an orchestra in his head and filling the room; he then pretends he is conducing the piece. The next morning, his wife Iris wakes him up for his new job as the music teacher at the newly named John F. Kennedy High School. He has a rather tense meeting with the assistant principle Gene Wolters, then runs into the principal Helen Jacobs as he wanders around the school, lost. After hearing her instructions, he feels a bit overwhelmed, even more so when his first class doesn’t go well, and the orchestra members don’t know how to play. Fortunately, he makes friends with Bill Meister, the P.E. teacher. Holland admits to Meister that he took the teaching job so he could have free time to compose, with Meister telling him that “he can’t remember the last time that was free.” 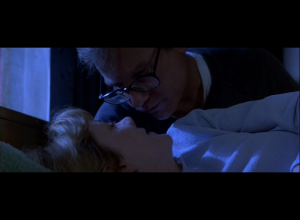 Although stunned when Iris announces her pregnancy, Holland is able to reassure her that he is excited to become a father

Holland continues teaching the orchestra, noticing one clarinet player, Gertrude Lang, having problems playing correctly. He asks her to stay behind, and tells her that they’ll find some extra time to help her improve. Holland still spends his nights composing, but his teaching still puts his kids to sleep. After one particularly disastrous test and a run-in with the principal, he realizes he needs a new approach ­to teaching. After a private session with Gertrude, he hears her crying, and she admits to him that she’s terrible, and just wants to be good at something. She leaves her clarinet behind and flees the room. As he starts venting his frustrations to Iris, she admits to him that she’s pregnant, and is upset that all he can say is, “Wow.” He assures her that he is excited to have a baby, and is inspired to reach to the students through rock ‘n’ roll music. As things begin to look up for Holland, Gertrude returns, telling him that she’s giving up the clarinet. He convinces her to try again, only to have fun with it this time. He finally reaches her, and she plays the clarinet solo at graduation.

To help supplement his income, Holland teaches driver’s education during the summer. One day, Holland speeds to the hospital with his students in the car, getting there just in time to meet his newborn son, whom he and Iris name Coltrain, or Cole for short. Unfortunately, Holland is soon in trouble for teaching rock ‘n’ roll in his class. Vice Principal Wolters is angry that Holland isn’t forced to stop the rock ‘n’ roll curriculum but is pleased that Holland has then been assigned to teach the marching band. Holland’s friend Meister helps Holland with running the marching band, if Holland helps student athlete Louis Russ get a passing grade in orchestra. Russ is assigned to the drums, but needs some extra help in learning how to keep a beat. The marching band marches in a local parade, playing “Louie Louie.” This parade also brings some bad news to Holland: as he doesn’t react to a fire truck siren, they learn that their son Cole is deaf. 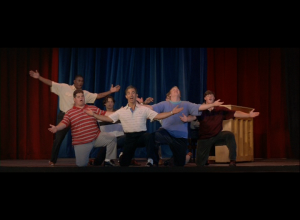 Meister helps save the show by using the football team as background dancers, with comical results

The decades roll by, with Holland keeping a distance between himself and his family, deeply hurt that he is unable to teach the joy of music to his own son. Iris is frustrated and angry that she can’t communicate with her own son, and even more upset that Holland doesn’t seem to want to be close with Cole. Graduation arrives at the high school, with Principal Jacobs letting Holland know that she’s retiring, and confides that she’s always considered him her favorite teacher at the school. The decades continue to roll by, until it’s 1980. Wolters, now the principal of the school, is on a mission to cut anything that is artistically inclined. It’s only thanks to Meister that the school musical is saved, with the football team being brought in to dance in the show. He drifts even further away from his family, being tempted to run away to New York City with student Rowena Morgan, not necessarily because he is attracted to her, but more to the idea of writing great music in New York. Ultimately, he decides not to go, but helps Rowena find a place to stay in the city.

Holland is affected by John Lennon’s death, and has another fight with Cole, as he believes Cole wouldn’t know who Lennon is, and Cole believes his father thinks he’s stupid. Realizing that his son is capable of understanding music, Holland tries to find new ways for the deaf students at Cole’s school to “hear” the music, particularly music without words. At a concert for the deaf students, Holland performs a song by John Lennon, dedicating it to his son. In 1995, Holland is still teaching at the high school, and is asked to Wolter’s office. Wolter has finally gotten his way of cutting the arts programs, with Holland being let go. Although he fights this, Holland still loses. He realizes that, at the age of 60, he doesn’t have any other options, and it is too late for him to finish his composition and get it published. As he sits in the empty music room, believing that no one will miss him once he is gone, he hears a car horn outside his window. Holland looks to see Iris and Cole, who help him pack up. They surprise him, however, by taking him to the auditorium, where many of Holland’s former students have gathered to say goodbye to their beloved teacher. The students then perform, with Holland conducting, the symphony he has spent the past 30 years writing.