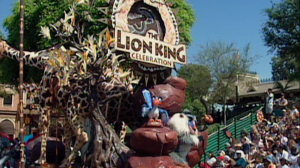 On June 1, 1997, the Lion King Celebration parade ended its run in Disneyland. The parade, starting on July 1, 1994, was notable for being the first parade to feature Audio-Animatronic figures outside of stationary attractions. It was also a combination parade and stage show, as the parade would stop at various intervals on the route and perform songs from the film, ending each performance with a version of “Circle of Life” while an Audio-Animatronic Simba let out a roar from the Pride Rock float. The parade also featured actors dressed as birds performing acrobatic stunts and remote-controlled animals.